The Happiness of the Katakuris (2001): Surrealist, horror, musical, black comedy. 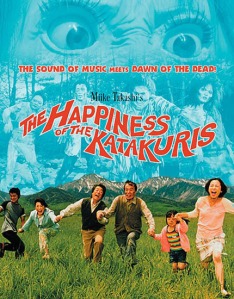 Takashi Miike’s musical-horror-comedy The Happiness of the Katakuris (2001) follows the exploits of the failure-prone members of the Katakuri family as they start up their quiet mountain bed & breakfast inn. As business starts picking up, and all their guests begin dying of various ridiculous causes, the Katakuri family is forced to band together in the face of supernatural events.

Takashi Miike is responsible for such shockingly violent films as Ichi the Killer (2001), Audition (1999), and Izo (2004). It is no shock that The Happiness of the Katakuris contains quite a bit of violence and death. But is it surprising that the majority of that violence is presented as humorous, and often times can actually be quite funny. Only Takashi Miike, the master of on-screen death, can present the multiple deaths of innocent people as shamefully hilarious. There were moments where I caught myself laughing and actually thought, “Wow, I’m a horrible person for finding this funny.”

The film is interspersed with moments of spontaneous song, and Claymation sequences. There is sense of the surreal all throughout the film – the responses to character actions are so out of proportion that they are comical. For example, one moment (shown in the trailer) where the father falls into a lake – the resulting splash is in proportion to a huge geyser explosion. The surreal moments take on a slapstick tone throughout the film. Yes, there are zombies, and they get their chance to sing too. It goes without saying that often the acting is melodramatic and out of proportion to a given stimulus, but this adds to the deliberately surreal feeling of the film and doesn’t seem as if it’s the product of inexperienced or incapable actors.

Technically, the film could be considered a musical. Each act of the film has its own accompanying song and dance. The musical numbers seem to be presented in a distinct Japanese style; one particular sequence has lyrics scrolling at the bottom of the screen, so that viewers can have their own karaoke moment. The music is catchy but often out of tune, and the dancing is pretty cheesy and simple. Considering the combination of this amateurish song and dance with the constant threat of death, I would also call the film a black comedy. Watching this film is a weird experience as it’s a constant collision of many different genres that are often at odds with one another.

Ultimately, this film could be seen to be about the bond of family in the face of supernatural adversity. The Katakuris are accident prone, and they are all failures in their own special way, but they manage to adapt to their problems over time, find solutions that work for them, and stick together until the end. Familial togetherness is probably the message that Takashi Miike was trying to convey, but one also wonders whether these morals were specifically tacked on as a sidekick, and juxtaposition, to the multiple on-screen deaths. However, the film is utterly original and you won’t see anything else like it. The Happiness of the Katakuris is required viewing for the Japanese cinema aficionado. And also the musical, black comedy, and surrealist aficionado.