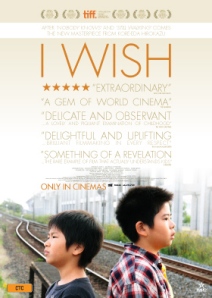 Hirokazu Koreeda’s I Wish (2011) is a bittersweet story told from the separate perspectives of two brothers. Koichi and Ryuunoske are two young boys who have been split across different houses and cities after the breakup of their parents; one living with their mother, and one with their father. They regularly keep in touch on the phone. One day, Koichi has the idea that they can wish for their family to be together as a whole again. He believes that if they make this wish whilst two bullet trains pass by each other, the energy created by the fast trains passing will cause the wish to come true.

The two kids playing Koichi and Ryuunoske are so cute and portray the emotions associated with family split really authentically. It is clear that the two brothers miss each other very much and their desire to reunite is what drives the film. However, I Wish can be very slow at points. This is definitely the film’s downfall. While the slower parts of the film are good at establishing mood, it causes the film to lag quite a bit. Additionally, some quirky moments of the film are too random, and stick out like a sore thumb rather than blending with the rest of the film. However, the story does build momentum, and the eventual payoff is well worth the slow moments.

Despite its slowness, I think this film was highly effective at giving an innocent, childlike perspective on the issue of separated families. This is what I enjoyed most about I Wish: it tells the story of families who are split apart, from the unique perspective of a child. This film isn’t a gauche reunion story like The Parent Trap (1961; 1998). The kids don’t want their parents to fall back in love; they just want the sense of ‘family’ back. The film ends on a very bittersweet note, one that viewers should definitely stick through the slow moments for. I Wish is an intelligent and sensitive story about an adult issue from a child’s perspective.

Note: Quick-shot reviews are a semi-regular feature on this blog, characterised by their shorter length than my regular reviews.