The Three Colours trilogy, directed by Krzysztof Kieślowski, consists of three films: Blue (1993), White (1994), and lastly, Red (1994). This conclusion to the trilogy confronts the French Revolutionary ideal of fraternity, or brotherhood. It lays bare the connections between all three films and, true to Kieślowski’s directing style throughout the whole trilogy, is a mesmerising visual feast.

Valentine (Irène Jacob) is a student, model, and dancer whose relationship with her boyfriend is fairly unsteady. One night after working at a fashion show, she is driving home and hits a dog on the road. She seeks out the dog’s owner in order to confess, and find out what she can do to help. After taking the dog to the vet, she returns to the owner’s house, and from this moment on begins a strange friendship with him. Parallel to this story, we are also shown the romantic troubles of Auguste (Jean-Pierre Lorit), a man whose story coincidentally mirrors that of Valentine’s new friend.

I loved Red. It had a very similar tone to Blue, and much less humour than White. It perfectly tied up the threads of the trilogy, not only with its central theme of interconnection and brotherhood, but also in its goosebumps-inducing ending. Irène Jacob is stunning as the doe-eyed Valentine and was a joy to watch. Although the film seemed to have much lower stakes in terms of its central story when compared with the others, the film developed in a steady way that didn’t feel rushed, nor did it meander. I found myself having a genuine interest in the characters, which made its conclusion that much more satisfying.

Throughout the film, your senses are assaulted with the most beautiful visuals and music. As usual, Zbigniew Preisner’s score is absolutely gorgeous and complements the tone of the film perfectly. I was impressed with the cinematography in Red from the very beginning, where there was an inventive sequence that had not yet been used in either of its predecessors. The fact that Red has the perfect score in addition to the beautiful visuals means that anyone with a passion for film aesthetics will find this one fascinating. The following are some of the very iconic shots from the film, as well as a few of my favourites. 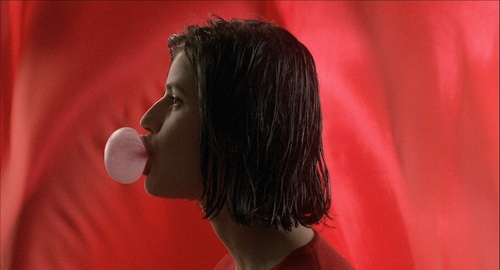