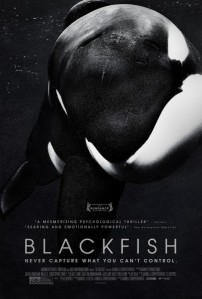 Once you see this film, you will never want to visit a marine park or zoo ever again. You will be motivated to stick up for defenseless creatures who can’t speak for themselves. Blackfish (2013) tells the story of Tilikum, the killer whale who is currently performing at SeaWorld in Orlando, Florida. Tilikum has been responsible for the deaths of three people. This genuinely upsetting documentary explores these incidents that continue to surround Tilikum, and also the issues in general that surround keeping killer whales in captivity.

Blackfish is constructed in the form of a general, ‘talking head’ style documentary. The majority of the interviewees are ex-whale trainers at various SeaWorld resorts, and they show a side to the parks that no guest has ever seen before. The ex-trainer interviewees are so passionate, and at times clearly angry and frustrated. It is heartbreaking to hear them struggle with the idea that although they train the whales, care for them, and feel genuine affection for them – ultimately, the whales are wild animals that have the potential to hurt, regardless of their trainer’s feelings.

Interviewees discuss the various fatal but preventable incidents that Tilikum is involved with, and also other incidents that involve whales in captivity, in order to paint a coherent and worrying picture of a system where these animals are exploited for the simple fact that they earn a lot of money. The documentary is a very clear exploration of a very complex issue. However, it is important to note that although Blackfish has an unambiguous point of view regarding animal rights, at no point is it preachy or moralistic.

The film is intercut with humorous and ironic (and exceptionally cheesy) old-school advertisements for SeaWorld from the 80s and 90s. When it comes time to discuss the court cases that involved SeaWorld after a trainer’s death, an interesting style of animation is used; the court is shown as if it’s drawn onto paper from an exercise book, bringing the court transcripts to life rather than just using on-screen text. In addition to this, video footage of performances with the whales, footage of attacks, and also beautiful scenes of whales in the wild very clearly show the contrast between healthy animals, and animals that are kept in captivity. Visually, the film is presented in not just an intelligent way, but in a varied way that keeps the narrative fresh. 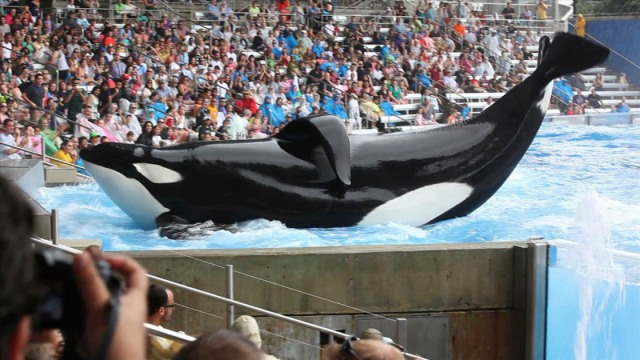 Blackfish is a near-perfect documentary. The was one moment that took me out of the experience, where the interviewees were discussing a SeaWorld trainer who was crushed by one of the whales whilst performing with them. We are shown footage where the trainer is crushed, repeatedly, and then in slow motion as one of the interviewees is discussing the damage done to his body. I thought this was gratuitous, and that it cheapened the tone. We did not need to see that footage repeatedly for emphasis. I always prefer films to ‘show not tell’, but in this case it was a bit much. However, this was the only gripe that I had with it, as every other piece of attack footage was shown in a fairly sensitive manner.

I could write a lot more, but I decided not to write too much about this film because I really think that everyone should see it, not just read about it. Initially, directly after watching Blackfish, if I were to describe the film in one word, it would be ‘upsetting’. However, upon taking time to consider it, the film is also empowering. Knowledge is power, and by bringing these difficult issues to public awareness, perhaps steps can be taken to remedy this clearly broken situation. Blackfish is an intelligent, passionate, and persuasive documentary, which I encourage everyone to see.