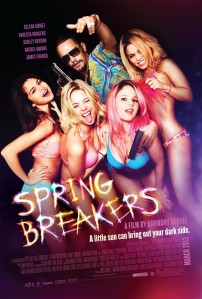 Spriiiing Breeeaaakkkk fo’ everrrrrr. Spring Breakers (2012) is one of those films that pans out pretty differently to how you anticipate it, whilst simultaneously being a pretty standard ‘alternative crime’ thriller. Four college girls (Selena Gomez, Vanessa Hudgens, Ashley Benson, and Rachel Korine) really want to go to spring break in Florida, but being students, find it difficult to scrounge up the cash. They decide to rob a local restaurant in order to make their way to omg like the best party ever. Finding themselves in jail during their spring break festivities, they are bailed out by a charismatic drug dealer slash rapper (James Franco).

If you’ve seen any of Harmony Korine’s other works, such as Gummo (1997) and Trash Humpers (2009), then the structure and aesthetics of this won’t surprise you. Korine uses some of his favourite tactics to tell this story, which involves non-linear visuals and audio in order to create a story that at times overlaps itself. Spring Breakers is an accessible way to introduce yourself to Korine’s style of directing, especially if you don’t feel like putting yourself through Trash Humpers. I don’t have many good things to say about that one. The story is linear, but due to Korine’s love of foreshadowing through overlapping audio and visual cues, it has a semi-ambiguous ending. I felt that the story developed at a good pace and I wasn’t bored at all. The soundtrack is great and the visuals are amazing – but I’ll elaborate on that point later.

I will say that I was worried about the feminist implications for the film. For a female-driven story about ’empowerment’ and getting what you want, it sure is kind of shallow. You begin the film by seeing a lot of T&A, and a lot of drunk men exploiting drunk women. Then the four girls want money, and they get money in the quickest and easiest way possible; not necessarily empowering for women, since their interpretation of ‘power’ is a caricature of masculine violence, deep voices and all. The girls go to jail, and they rely on a male figure of authority to rescue them. And so it goes. For being a film about ‘female power’, the gaze on the four girls was 100% sexual, 100% of the time. They are wearing bikinis for the majority of the film, but come on. Are we really saying anything unique by equating female power with sex, yet again? I don’t think that Spring Breakers does a disservice to women all over the world (there are other films that earn that title), but there is something distinctly shallow about its portrayal and gaze of the girls that made me feel uneasy.

Selena Gomez is quite convincing as Faith, the most vulnerable and hesitant of the four. Vanessa Hudgens and Ashley Benson are great as Candy and Brit, who you might call the instigators of the story – their rebellious natures and willingness to commit violent acts drive the central conflict of the film. Rachel Korine is forgettable as Cotty, but she doesn’t seem to have as much screen time as the others, so it’s not a big deal. As an ensemble, they work together well, and seem to have a lot of fun – but whether that’s acting, or a genuine love for the party scene, who knows. Although each of the four girls has a ‘persona’ to play, I didn’t feel that these were fully explored. We know that Faith is the churchy one, Candy and Brit are the rebels, and Cotty is the other rebel in the background. Beyond this, we don’t learn too much about them. They’re always “the girls”, rather than individual people, which I’m not a fan of.

Say what you like about James Franco, but he’s excellent in this. His natural ability to absorb the mannerisms of people are put to the test in Spring Breakers. Clearly based on filthy, talented rapper Riff Raff, Franco’s performance as rapper/criminal Alien is actually hilarious. The monologue in his house where he brags to the girls – “Look at all my shieett! I got rooms full of this shiiiiet!” – was so funny and had the whole room laughing. He’s clearly parodying something about rap culture, but at the same time his portrayal of the character is quite earnest. If he had stuck to the parody elements of the character, I would not have been impressed, and it would have come off as cartoonish and silly. Because he manages to balance both the character and the parody, his portrayal of Alien is one of my favourite things about this film.

I think one my favourite moments of this film was a montage scene set to Britney Spears’ song, ‘Everytime‘. I love a good montage. I’m not going to spoil it, but it’s an excellent example of juxtaposing a gentle song with brutal violence for maximum effect, as opposed to the montage song matching the content. Korine is certainly not the first person to do this, but there was something about this montage that was special.

My other favourite thing about Spring Breakers, which may come as no surprise to some readers, is the aesthetics and cinematography. The film seems to have a consistently fluorescent colour palette, and there are some beautiful moments and visual effects. One moment where I was really impressed was toward the beginning of the film, where Benson and Hudgens’ characters are sitting in a lecture theatre at college. As the lecture slides change colours, the light shining on all the students’ faces does also, and this is very visually impressive. It also sets the scene of conformity and monotony that the girls are attempting to escape. The film’s use of light is innovative. The cinematographer on this one is Benoît Debie, who worked with Gaspar Noe on his films Irreversible (2002) and Enter the Void (2009); both films which had disturbing but totally unique visuals.

It might seem like I have a lot of praise for this film. It’s true, I do. But at the same time, even though there were elements of this film that I enjoyed, I can’t give it top marks. For a film supposedly about female power, it doesn’t really place much importance on the individual needs and identities of its female characters. The film is visually beautiful, has great music, and is engaging and fun (if you can say that, considering its violence). It’s a shame that a similar emphasis wasn’t put on the development of its characters, or on the overall message of the film.