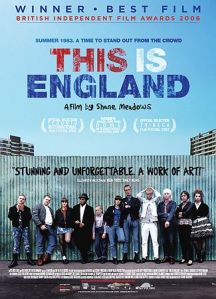 Having since inspired two television sequels, This Is England (2006) focuses on the lives of a group of young skinheads in England in 1983. The divisive Margaret Thatcher is in power, and the Falklands War is fresh on everyone’s minds; especially that of Shaun (Thomas Turgoose). Shaun is 12, and gets picked on at school. On his walk home, he meets a friendly group of skinheads and becomes their group mascot. As one of the skinheads returns from jail, Shaun learns that being a skinhead in England in 1983 is not just about rebellion and good times; it also has the potential to be about violent crime and racism.

What an amazing film. Thomas Turgoose is so great as little Shaun. The film is mostly told from his perspective, and his portrayal of the young kid who finds his niche with a group of fun-loving skinheads is initially kind of heartbreaking. You see him down in the dumps after being bullied, and your spirits rise with him as he finally is able to find happiness with a new group of friends. You can believe his escalation of behaviours, as he just wants to belong. Top marks also go to Stephen Graham (of Boardwalk Empire fame) in his role as skinhead Combo. He paints such a complex portrait of racism and violence, and gives his character so much depth. The film centres around the skinhead group as it changes and evolves, with a brutal and poignant conclusion.

I was really impressed with the intro sequence of the film. Constructed with archival footage of early 80s England and beyond, it served as a reminder of the events that occurred during that time, but also was a good method to set the tone of the film. We hear loud music and see contrasting footage of Margaret Thatcher attempting to relate to the people she governed, plus pop culture icons such as Knight Rider. As well as the intro, the cinematography of the film is bleak and gritty. So many films set in the 80s are all about the bright colours and tacky lighting, but rather than being stereotypical, the art direction of this one reminds the audience of the actual tough times (both social and economic) that occurred in England during the 1980s.

This Is England is not necessarily a feel-good film. In fact, it’s a pretty uncomfortable film to watch at times. However, there is quite a bit of dark humour as well, with many laugh out loud moments. This film’s success is absolutely due to its amazing actors who carry their roles so well, particularly Thomas Turgoose and Stephen Graham. This Is England is a very specific period piece that cannot be missed. It is a powerful and unexpected story about friendship and belonging, racism, society and politics, all in a very charming yet bleak nutshell.