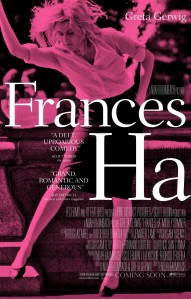 Noah Baumbach’s ode to mumblecore Frances Ha (2013) is a surprising film that will defy your expectations. Frances Halliday (Greta Gerwig) is your typical ‘young modern person’ trying to find her way in life. After an awkward break-up, Frances’ living situation becomes increasingly complicated, as does the search for her own life’s purpose. We follow her as she makes mistakes and seeks solutions to her many dilemmas.

I went into this film with a fairly cynical mindset. “This will just be one of those upper middle class white person angst stories,” my brain said. “Get ready for another episode of Girls.“. Well, brain, you were actually kind of wrong. Normally this type of narrative really frustrates me, but I really enjoyed Frances Ha. Even though there were some problems with the film, its story was told in an intelligent and engaging way.

The story is structured in terms of Frances’ numerous addresses as she flits between apartment to apartment. When you’re in the midst of watching the film, there doesn’t seem to be any sort of straightforward storyline as Frances moves from place to place. However, after you finish watching the film, the story and themes of the film clearly fall into place. It’s one of those films that is bettered by reflection after watching it.

The beginning of Frances Ha introduces the characters in a funny and playful way. We see Frances and her best friend Sophie (Mickey Sumner) gallivanting about the city, having play-fights in the park, discussing literature, drinking coffee, going to sleep in the same bed. They’re a couple of young best friends having crazy adventures and shenanigans, with a mischievous spirit that seems reminiscent of Chytilová’s Daisies (1966). This makes their eventual disagreements even more heartbreaking.

The dialogue is snappy and is peppered with witty insights into the life that Frances and her friends lead, poking fun at both the characters, the situation they’re in, and the story itself. For example, one particular character is definitely speaking for the viewers when he says to Frances, “You aren’t poor. There are real poor people, you aren’t one of them. … That’s offensive to actual poor people”. The film is quite self-referential at points, and this can be equal parts smart and insufferable.

I really loved the use of music in Frances Ha. The score is clearly inspired by Woody Allen and French New Wave films, and is used magnificently throughout. Dreamy, romantic music is used to show the soulmate-style relationship that Frances and Sophie have, and this music is used exclusively when they connect and engage with one another on a deep level. The triumphant music that blasts when Frances opens up a letter to reveal a tax return, and the frenetic music that accompanies her frantic search for an ATM machine were a couple of my favourites as well.

The use of pop music was also excellent. Hot Chocolate’s “Every 1’s a Winner” was the perfect accompaniment to Frances’ spontaneous weekend trip to Paris, reflecting her own satisfaction at ‘travelling abroad’, and also being an ironic comment on the fact that she decided to take the trip after being sent a credit card in the mail. She isn’t that much of a winner after all. The film also uses David Bowie’s “Modern Love” to great effect. 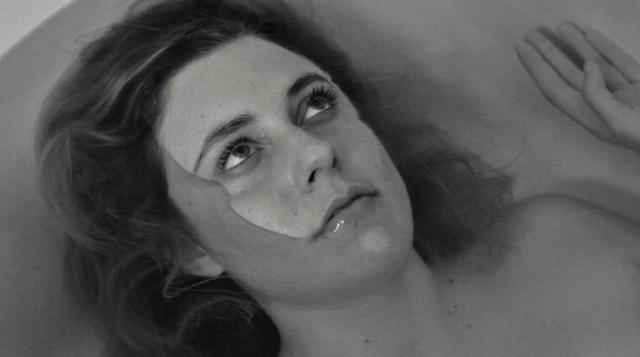 However, the acting in this film is slightly patchy. I haven’t seen any of Greta Gerwig’s other work so I’m not sure if this is her signature acting style or not, but at times her delivery of lines was unconvincing and amateur-sounding. I was considering this earlier, and I had a thought. What’s the difference between adorable hipster awkwardness and poor acting? It could have been either of the two at work here. I just can’t tell anymore.

Also, where was the need to shoot the film in black and white? Baumbach is clearly inspired by genius filmmakers like Woody Allen and the greats of the French New Wave in this choice, but rather than using the lack of colour to his advantage, it just has the effect of making the film look pretentious. He didn’t do anything interesting with the light in this film to justify the choice to film in black and white, and there was plenty of opportunity to do so. If this had been filmed in colour, there could have been some really interesting colour symbolism to explore. But I’m not going to re-write Baumbach’s film for him!

Ultimately, it’s easy to write this film off and disregard it as one of those “millennials don’t know how to live their life and are so irresponsible as a result” films. But there are deeper themes at play in Frances Ha. Like many people her age, Frances has goals and motivations for herself, but due to a variety of reasons, she isn’t able to reach them. Frances aims to be more than an apprentice dancer in her company; she wants to be a lead dancer, she wants to go on tour, she wants to choreograph her own work. There are all these things she wants to do, if only she had the opportunity to do them. This is a really common experience among young people today who have the curse of being over-qualified and under-experienced. As Frances’ friends are “getting it together” and succeeding in their day jobs, Frances wants more. This film is engaging and quirky, and despite its problems, I’d definitely recommend it as a casual weekend watch.