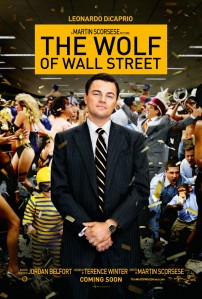 Martin Scorsese’s The Wolf of Wall Street (2013) is based on a memoir of the same name by prolific, filthy rich ex-criminal Jordan Belfort. The film follows the events of the book, starting with Jordan as a beginner stockbroker. He’s hoping to become successful on Wall Street, when all of a sudden the big stockmarket crash of 1987 occurs. After this setback, he starts working for a smaller firm that specialises in penny stock. He discovers that he can make huge profits using his powers of charm and charisma, and some very convincing lies – and the story escalates from there.

Scorsese has created a monster with this film. Not only is it causing a big moral outrage amongst audiences, it’s also roughly three hours long. However, it flows very well and makes good use of its time (we’ll discuss the moral outrage later). There wasn’t one moment where I thought about how much time had passed, or how much story was left to go. The film is told from Belfort’s perspective, and Leonardo DiCaprio is the perfect man for the role. I think it’s time for him to win an Oscar. His performance was simply amazing. Between his classier moments, and the moments where he is completely off his face on drugs, DiCaprio is so convincing that he seems to have taken on the identity of Belfort himself. When you watch an interview with Jordan Belfort and compare it with DiCaprio’s performance, you’ll be able to clearly see the level of commitment on display.

The supporting cast is also consistently great. Jonah Hill is amazing as Donnie Azoff, Belfort’s best friend and partner in crime. The supporting actor race at the Oscars this year consists of some great performances, and I’m not sure he’ll get the award. But he absolutely deserves his nomination because not only is he hilarious (we know that already), he dealt with his character’s more dramatic or serious moments with an impressive amount of subtlety. Impressive is definitely the operative word for his performance in this film. Margot Robbie shines as Naomi, Belfort’s beautiful second wife. She has some seriously good acting skills and I think we’ll be seeing much more of her from here on out. Meanwhile, Matthew McConaughey continues his ‘McConaughssance‘ with his brief role as Belfort’s mentor at his first job. Even though he’s only there for a couple of moments, his performance is so memorable that you’ll think he’s in the film for much longer.

The cinematography is quite excellent, and although I noticed a number of editing issues, I felt the film’s visuals were constructed in a very immersive way. A sequence where Belfort teaches the employees of Stratton Oakmont how to sell stock to people is one example of the film’s interesting use of intercutting different moments to construct a meaningful whole out of the separate experiences of different characters. I have to admit that I’m not the hugest Scorsese fan, but I really enjoyed his interpretation of the source material. Often the use of inner monologue in his films makes me feel slightly awkward. In The Wolf of Wall Street, however, it seemed to work well.

This film is hilarious. Although it becomes more sober towards the final hour, the first two hours are jam-packed with laughs. DiCaprio and Hill’s bromance is obvious from the beginning. They have a lot of on-screen chemistry; so much so that when they have fun, you have fun.

However, the film is also kind of disgusting. Its treatment of women is deplorable. All of the characters are essentially horrible people and I can’t think of a single one that is redeemable. Anyone who calls $100 bills “fun coupons” is someone that I don’t want to have any involvement with. I was concerned about the lack of balance in the film – we’re never shown any of the victims of Belfort’s shady dealings. But at the same time, I was almost having too much fun to worry about them, and I know how bad that sounds. This film was the best fun I’ve had at the cinema in a long time.

Is The Wolf of Wall Street disgusting and horrible at its essence? Yes, because the characters are disgusting and horrible, and we’re stuck in this world with them. Does it present the characters’ actions as desirable or glamorous? Heck no. I think the film is often interpreted as advocating that lifestyle because it shows the story as it happens, without layering a “don’t try this at home, kids” tone over it. Anyone who would be motivated to try massive amounts of drugs after seeing Belfort enter the ‘cerebral palsy phase’ during a certain (hilarious) scene shouldn’t be allowed to leave the house. Same goes for anyone who thinks taking financial advantage of people might be a good idea after watching this film. Just stay inside, shut the curtains, and don’t make eye contact with anyone.

Yes, Belfort constantly tells us why it’s acceptable for him to commit these crimes and generally do horrible things. But he’s not convincing you to do it as well. He’s showing an insight into his own process of rationalising and justifying his actions. He’s a dirtbag, but at least he’s honest about it. Many amazing blogs have written about this topic, but I’d like to direct you specifically to Sati’s fabulous review on her blog Cinematic Corner, where she elucidates her feelings on this issue in much more of a concrete and clear way than I ever could.

SPOILER ALERT – don’t read this bit if you haven’t seen the film yet!

I just wonder why no one is talking about the scene in this film where Belfort sexually assaults his wife. Spousal rape is an issue that people choose not to talk about for some reason. Unfortunately, this includes both general society and film reviewers. I wonder, if Belfort had chosen to sexually assault a random girl on the street, would there would be more discussion about it? There’s heaps of rhetoric flying around about the drug use, financial crime, and generally debauched behaviour. Everyone’s talking about the explicit sex scenes and nudity. Why is no one choosing to discuss the very significant issue of spousal rape? That’s where peoples’ moral outrage should be located, if anything. I’d definitely suggest reading this (NSFW-ly written) article about it.

After The Wolf of Wall Street had ended and I’d been stuck inside Jordan Belfort’s world for three hours, I kind of felt like I was on drugs. I was also saying the F word a lot. This film gets inside your head. The characters and events in the film, as aforementioned, are genuinely horrible. But despite that, it’s a lot of fun too. Expect big laughs and more than a few shocking moments. This film is so worth watching in the cinema and I would argue that that’s where it’s best enjoyed.

Is it worth paying for a ticket?: Yes!
Watch the trailer here.