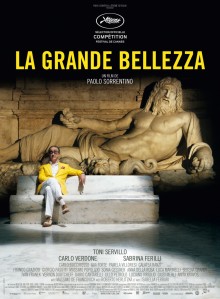 Paolo Sorrentino’s The Great Beauty (2013) follows the daily and nightly life of Jep Gambardella (Toni Servillo), an infamous socialite living in Rome. In his 20s, Jep moved to Rome and wrote an extremely successful novella, which he has lived off ever since. Now, aged 65, the emperor of Rome’s nightlife, he comes face to face with his past in an unexpected way. The Great Beauty tells the story of a writer whose identity is established in the public eye, but privately, he is still searching for it.

Toni Servillo is the perfect actor for Jep Gambardella. His portrayal of the ageing socialite is so charming, but never sleazy. He perfectly affects the air of someone who has the confidence of their social status supporting them, but also someone who is so bored with everything. After writing his novella, and it being a huge success, Jep has been working in a journalistic capacity, reviewing art exhibitions. He seems to find meaning in this, but also seems discontent with having a career focused on the genius of others. Jep has a lot of ideas in his head that he could explore in a future novel, but will he ever get the time to sit down and write it, between his packed schedule of socialising, partying, and exploring his past? The film takes on the ideas of love, sex, religion, work, and meaninglessness. Like Jep, who is sick of unnecessary natter around these issues, so too does the film eschew rhetoric, attempting to cut to the core rather than consider the myriad extraneous issues surrounding them.

The parties feel just like something Jay Gatsby would organise. Dusk-til-dawn affairs, flowing drinks, the occasional narcotics. Old people, strange people, beautiful young women – everyone attends. They are shot in a way that does feel straight out of Baz Luhrmann’s The Great Gatsby (2013). You haven’t seen debauchery until you’ve seen an older Italian woman’s nose start bleeding from snorting too much cocaine off a kitchen chopping board, whilst the sun rises on the old stones of Rome. However, though these scenes are very Luhrmann-esque, the whole film feels like something straight out of the mind of Fellini. This film is as much of a love letter dedicated to Rome as Anita Ekberg splashing about in the Trevi fountain in La Dolce Vita (1960).

The Great Beauty is, for want of a better word, a truly beautiful film. From the very beginning, the cinematography is simply stunning. Rich colours, beautiful sweeping shots that take in all elements of a scene’s environment, with a particular focus on the faces of characters, and the occasional loving glance at the face of a marble sculpture. It seems that the camera is looking at everything that’s beautiful in Jep’s world, much like a tourist in Rome would. The music is also amazing. The film uses a number of choral pieces throughout that are heard during key moments and are so evocative. Creatively, the film is a work of art. 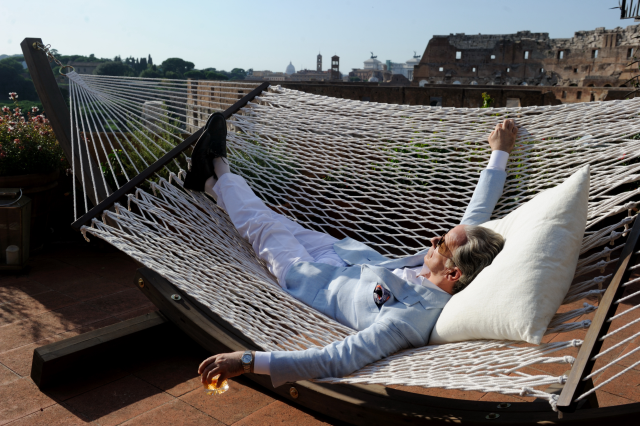 This film has received some criticism on a number of levels. Although the film works as a whole, when looking at its parts, some flaws can be seen. Although Jep Gambardella’s character is fleshed out sufficiently, his friends are not explored as well, which makes them feel slightly shallow at times. I felt that this might have been intentional, though, in order to show that friendships or relationships can be disposable in Jep’s world. The story can be repetitive and circular, and arguably purposeless – party, analysis, understanding, party, analysis, romantic conquest, understanding, party. In my opinion this was done intentionally to illustrate how Jep feels about his current life – monotonous and boring, despite its fun and glamorous moments. After reflecting on the film, I came to the conclusion that its perceived flaws are also a part of its storytelling.

Watching this film in the cinema is a visceral experience. Maybe it’s just me, but moments of The Great Beauty were so beautiful that it brought tears to my eyes. It’s a long film, over two hours long. But I was captivated the whole time. Whilst the film is quite dialogue-heavy and light on a clearly defined story, it is just so beautiful (visually and thematically), that you can’t take your eyes away from it. The final credits are another example of the amazing cinematography, so be sure to stick around to watch them also.

Is this worth paying a ticket to watch in the cinema? Yes, absolutely. The big screen and surround sound serve this film so well. The Great Beauty is beautiful, elegant, and moving. Will it win the Best Foreign Film at the Oscars? It’s a tight race. This was definitely one of my favourite films released in 2013. Top three for sure. Loved it.

Is it worth paying for a ticket?: YES!
Watch the trailer here.