In Bruges (2008): “We shall strike a balance between culture and fun.”

It’s in Belgium. In Bruges (2008, dir. Martin McDonagh) is a black comedy starring Colin Farrell, Brendan Gleeson, and towards the end, Ralph Fiennes. It follows two Irish hitmen, Ray (Farrell) and Ken (Gleeson), as they’re sent on an assignment to Bruges by their gangster boss, Harry (Fiennes). Hilarity ensues as Ray and Ken explore the historic city and wait for further instructions from Harry, regarding who their next target is going to be.

I remember hearing lots of amazing things about this one when it first came out in 2008. “You have to see it,” someone says in my memory. “It’s soooo good.” I watched this one last night and didn’t enjoy it that much. The first half was sort of tedious for a number of reasons, and although the last twenty minutes to half hour was very good, it doesn’t really make up for the rest of it. Let me explain.

The acting in this film is universally good. I’m not too aware of Colin Farrell outside of this Family Guy clip, but I liked him in Seven Psychopaths (2012). I was pretty impressed by him in In Bruges as well, even though he does have a tendency to act with his eyebrows. He suits the comedic-slash-disturbed role well, particularly when it comes to his character’s backstory. Brendan Gleeson is good as Farrell’s stoic counterpart Ken, although he is mildly forgettable. I watched this with a big group of people and when we were watching the film, we referred to him as Mad Eye Moody because that’s his name in Harry Potter and we just couldn’t remember his actual name. Meanwhile, Ralph Fiennes is fantastic as their sweary gangster boss. He has a filthy mouth and his acting is stellar. Plus I’m not sure if anyone else noticed this, but in this role he hardly blinks even once. That must have taken a lot of effort. Clémence Poésy also shines as Ray’s maybe-girlfriend Chloë, and is her usual charming self, even when selling drugs and robbing people.

Come to think of it, there are a lot of Harry Potter actors in this one. Ralph Fiennes, Voldemort; Brendan Gleeson, Mad Eye Moody; and Clémence Poésy, Fleur Delacour. Coincidence? Maybe.

This is a funny film. The jokes are solid, and are typically, British-ly, dark. It’s just that the story is slightly tedious. The first half of the film is the same concept over and over with a couple of backstory moments, which are the best parts. Ray and Ken are the perfect odd couple: Young Ray likes to go to the pub and meet the ladies, older Ken wants to see museums and religious artefacts. The moments where the story eludes tedium is where it escapes this dynamic. Unfortunately, much of the film focuses on Ray and Ken as a duo. 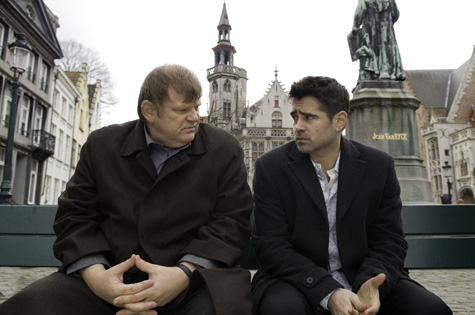 However, there are some standout moments, such as any time little person Jimmy (Jordan Prentice), who prefers to be called a dwarf and not a midget, is on screen. He’s only a minor character but I enjoyed his scenes the most. The last twenty minutes to half hour is where the story picks up and becomes really compelling. Coincidentally, this is where Ralph Fiennes comes in. His character breaks the sleepiness of the rest of the film because he’s so different to Ray and Ken, and introduces a different dynamic between those two characters as well. I wonder if he had been in the film more, whether I would have enjoyed it more.

I read bits of the script of this one to see whether it’s a translation from-script-to-film issue, and I think it might be. When reading the script, the relationship between Ken and Ray is really interesting and witty. The characters jump off the page and the writing is funnier. Then again, maybe it’s an acting issue. Who knows.

For a film set in such a beautiful city, the cinematography does not highlight it at all. There are some scenes where Ray and Ken are looking around at some art and architecture, and the medieval streets of Bruges. But the film is shot in such a way that we can’t see much of it. I wonder if this was done intentionally so that we focus on the actors rather than the scenery, but I found myself wanting to see more since the characters kept talking about how beautiful Bruges is, and how it looks like a fairytale come to life. It’s all well and good to say that it’s beautiful, but let us see it! The fight scenes are shot well though, as are any moments where a dead person is on screen. Additionally, the music is great, and sets the tone well throughout.

Ultimately, this film was kind of disappointing. Even though I really liked the last twenty minutes to half an hour (wish I had a better time estimate on this, but it’s roughly from about the moment where Ralph Fiennes appears, to the end of the film), the rest of it just didn’t match up. Usually, with a film I’m not a fan of, I can praise the cinematography or art direction but I can’t even do this here. In Bruges had some laughs and some redeeming aspects, but overall, it’s just so-so. Although I would recommend it if you’re a fan of Ralph Fiennes, because this is some great work from him. I would also recommend it if you’re a fan of British-style dark humour, because there is plenty of that. If you have 107 minutes to spare in your day, it’s not a bad way to spend that time. Just don’t expect anything amazing.