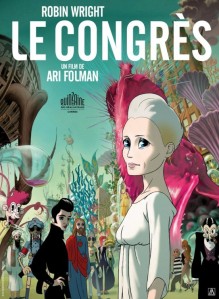 Ari Folman’s The Congress (2013) is a surreal blend between live action and animation, starring actress Robin Wright as an alternate version of herself. Robin has reached a point in her acting career where it’s difficult to get good roles. Her agent introduces her to a man with a strange proposition in order to sustain her career over time, through the use of a revolutionary new scanning technology. Twenty years later, technology has advanced so much that the line between real and hallucination is increasingly unclear. Robin must fight for her own identity and family in this new world.

This film almost feels like two movies. The first, where Robin has to make a difficult choice to save her career through the use of emerging technology; and the second, where her career is hijacked by the very technology she willingly participated in, and she must rebel against it to save herself and her children. Even though the two ‘films’ do feel like very separate stories, overall, the film as a whole is cohesive. The film is sealed together with themes of family, identity, personal freedom, intellectual property, terrorism, capitalism, rebellion, and an overall whimsy that lends a disturbing air to the more destructive themes; all of which are common between the two parts of the cohesive whole. The storytelling is done in a very interesting way, and develops at a fairly rapid pace.

Robin Wright seems like an unlikely choice for a film like this, but to her credit, she works well in her role. She is the perfect anchor for all the craziness that happens during the second half of the film, with her calm demeanour and clear motivations. Harvey Keitel puts in a good performance, but seems tired. Jon Hamm is also in this film for a while, and is a surprisingly good voice actor. Overall, the performances in The Congress were quite good.

The animation is much less ‘smooth’ than Ari Folman’s previous work Waltz With Bashir (2008). It is much more cartoonish, but this lends to the overall surreal tone of the work. The second half of the film is like an animated ‘spot the celebrity/religious figure/art icon’ game, which can slightly distract from the dialogue and storytelling. Being someone who is easily overcome by beautiful cinematography, there were moments in this film where I was just astounded by the crazily imaginative imagery. It’s almost to the point where I don’t want to post an image of it. The trailer (linked below) is absolutely worth checking out to see a miniscule selection of the wonderful visuals in this film.

But it’s not all good performances and amazing visuals. Even though the film has a gigantic world that feels so expansive, it also feels slightly underexplored. It seems as if we’ve only scratched the surface of the fantastical universe that the film’s strange technology has built. I wonder if this was intentional. But at the same time, I would have loved to see and know more. The film is also overtly complex and has the tendency to be confusing with its layers of hallucination and reality. The ending is also quite ambiguous, so if you’re uneasy with ambiguity, then you may find the ending fairly uncomfortable.

I have to say that I enjoyed Folman’s Waltz With Bashir a bit more than this one, but I did enjoy them both for different reasons. The Congress is metaphor-heavy, and its storytelling can be complex. It’s visually stunning and very unique. Even though there were some elements to this film that were slightly disappointing, I would still recommend it as a film worth watching purely due to the scene where the world transitions from live action into animation. Amazing stuff.