Hi everyone, here’s the follow-up to my cinematography post focusing on an amazing film that you might have heard of, called Rosemary’s Baby (1968). I wrote this review for the amazing Cinema Parrot Disco‘s IMDb Top 250 Challenge Blogathon series. The series is shaping up to be very successful, with lots of great films being highlighted and celebrated for their excellence! If you want to know more about some film classics that seem to be included in everyone’s “best films of all time” lists, then go forth and read. I went a little bit crazy with this one because once I started writing I couldn’t stop. Nevertheless, enjoy!

The second film in Roman Polanski’s famed Apartment Trilogy, Rosemary’s Baby (1968) is a film synonymous with the horror genre. After moving in to a beautiful yet spooky apartment building, Rosemary and Guy Woodhouse become close with their annoying neighbours Roman and Minnie, whether they like it or not. Rosemary becomes pregnant under mysterious circumstances, and with her mothering instincts kicking in, she must fight to protect her unborn child against supernatural forces.

Where does one start with a film that is so iconic, and so ubiquitous? Where do you start writing a review of a film that is so universally loved, and after you finish watching it, you have to sit in silence for a moment to pay it the respect it deserves? It may come as no surprise to say that I love this film. It’s been in my top 10 films of all time list ever since I started thinking about a top 10.

Firstly, the music and sound design are two of my favourite elements of this film. From the very beginning, when the camera is panning over the metropolis of New York City, we hear a simple lullaby that is at once comforting and threatening. This immediately sets the tone of the film, and when the camera rests on the creepy building that Rosemary and Guy seek to make their home, the audience instinctively knows there’s something wrong with it. The repetition of this lullaby during key moments increases that feeling of being threatened. In addition to the music, the sound design is perfect in general. During scenes inside the building, we can hear city sounds, creaking floorboards, kids screaming from outside, taps dripping, traffic noises – all of these sounds combine to create an environment that seems both protected from the outside, but also vulnerable to it. The sound design is as much a storyteller as the characters are. 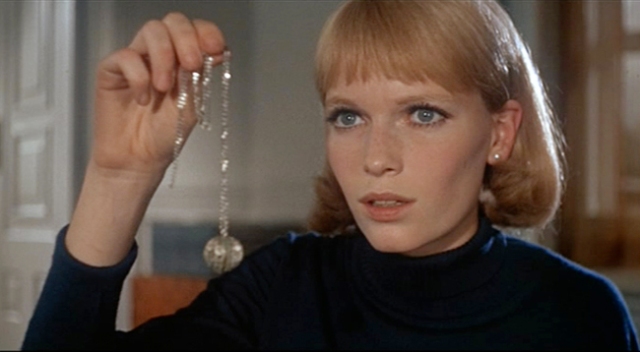 In terms of the acting, Mia Farrow is charming as Rosemary from the very beginning. She plays her character with such innocence, but also a rawness that’s difficult to pinpoint exactly. At times she’s childlike, at times lustful. As her body changes during pregnancy and she becomes confused by her condition and physical decline, she portrays the conflict between wanting to be healthy and wanting to keep her baby in such a heartbreaking way. Ruth Gordon and Sidney Blackmer portray Minnie and Roman, the suspicious neighbours, perfectly. Particularly Ruth Gordon, who scored a Best Supporting Actress for her role, and whose intrusion into and influence upon Rosemary’s daily life and pregnancy is played with such well-meaning menace. John Cassavetes’ performance as Guy is fraught with his own secret conflict and can be frustrating to watch for this reason, but is also very good.

There are a number of moments in Rosemary’s Baby where I just throw my hands up and say, “That’s it, this is a perfect film.” One particular moment, where Rosemary and Minnie are washing dishes in the kitchen after a dinner party, and Guy and Roman are smoking together in the living room. Rosemary looks back from the kitchen toward the living room to see where Guy is, and we can’t see or hear them, but all we see in that shot is smoke curling across the air from where they’re sitting. Something so simple can be so threatening, and Polanski’s direction nails it every time.

Speaking of which, the direction and cinematography in Rosemary’s Baby are top notch. The camera work adds to the overall feelings of tension as it looks through the apartment slowly and creepily. Any scene where the camera is following Rosemary and another character through the apartment seems strange because it feels like there’s an extra person hanging around watching them. Later in the film, there is some interesting handheld camera work, which adds to the frenzy of certain scenes. The film’s dream sequences are also directed impeccably, in such a way that they do seem like real dreams, rather than ‘movie dreams’ that can be a bit too linear to be realistic.

Meanwhile, the cinematography is amazing. The way the film is constructed visually is just as impressive as the camerawork. Early on in the film, Rosemary and Guy paint the apartment white to make it feel lighter – later in the film, as Rosemary’s pregnancy progresses, the use of shadows and angles makes the apartment look just as dark as before, even though the colour scheme is light. This is but one example of the amazing coexistence between the film’s cinematography and story.

Rosemary’s Baby also has a lot of good rewatch value. Small looks, clever elements of cinematography, and symbolic props add another layer to the film that you might not catch upon first viewing. One example of this is where Rosemary and Guy are looking at baby clothes – revulsion quickly flits across Guy’s face when Rosemary holds up a small jumper. Having already seen the film, something so simple as a facial expression can have a strong impact on the viewer. These smaller moments are so rewarding when you watch the film for a second, or even a third, time.

Finally, the ending of the film is one of the more perfect film endings. The final scene of the film (no spoilers here) is one of the best. Even though some elements of it can be cheesy, purely due to the supernatural elements at play in the film, the “big reveal” is so sinister that I tend to forget about them. Rosemary’s character arc is complete, and as a viewer it can be difficult to reconcile her actions throughout the film with the actual ending of the film. But the film raises an interesting question about what it means to be a mother, and the kind of protective instincts that might arise in a mother upon giving birth to a child.

You might be able to tell that I am a big fan of this film. I honestly could write a lot more about it but I should probably stop before I write a whole book. Rosemary’s Baby is a film that will stay in my top 10 for a very long time. It is a slow burner, but it develops at a steady pace and certainly gathers a lot of momentum. Please watch it, if you haven’t already. It is absolutely worthy of its place in IMDb’s Top 250, and is probably one of the best horror films ever made.