Does anyone else have very fond childhood memories of this film? I certainly do! I wrote this review as part of Cinema Parrot Disco‘s amazing John Hughes blogathon. So far, several excellent Hughes films have been featured, as well as some iconic music and quotes from his films. Do check it out! Without further ado, here’s my take on Beethoven (1992).

Responsible for a spike in sales of St Bernard puppies during the Christmas of 1992, Beethoven is a film that at its core addresses the concept of family, togetherness, and acceptance. On the surface, it’s a funny film about a giant dog and his family. Also, the dog’s vet wants to kill him for animal testing purposes. This film was written by John Hughes under the pseudonym of Edmond Dantès.

Beethoven has the dumb luck of running away from a potential threat and arriving at a family home where the kids and mum are happy to have a dog. However, the father is fairly neurotic and anally retentive, initially rejecting the idea of keeping a dog, insisting that it will ruin everything. Little does he know that Beethoven will work his way into his heart as well.

When watching Beethoven, I was surprised at how effectively the film showcased the dog’s humanity. He seems to have his own lines in the script in response to the human characters’ discussions and actions. We hear whines and other dog noises that seem strangely human in tone, which makes him seem just like another human. Beethoven also seems to have human idiosyncrasies, such as fainting as a result of his fear of needles. He also somehow understands the subtlety of human social nuance and can tell whenever the kids are in danger.

However, there are a couple of things that just aren’t subtle about this film. It contains some of the most emotionally manipulative music ever. It’s mostly John Williams-esque modern classical music that swings wildly in tone so that your own emotions can match it. Also, the film contains the most morally unambiguous villain ever. The first line we hear from the evil veterinarian is “I need puppies!”, as thunder claps in the background and lightning illuminates his face.

Watch out for Stanley Tucci as one of the evil vet’s bumbling henchmen, and David Duchovny and Patricia Heaton as the sleazy business people trying to take advantage of the family dad’s air freshener business. Also, apparently a very young Joseph Gordon Levitt is in this but I couldn’t spot him anywhere. 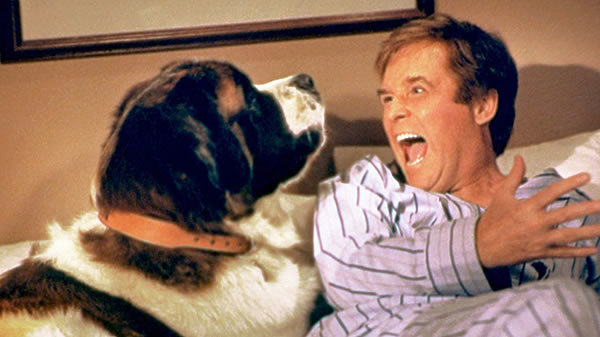 I experienced some serious childhood memories whilst watching this film. Some of the moments of the film seem somehow iconic – the scene where the family choose a name for the dog by picking names out of a hat, Beethoven and a young girl sharing an ice cream cone (disgusting), Beethoven getting all muddy and then shaking his wet fur all over the neurotic dad’s bedroom, the montage of the dog growing up and ruining things set to ‘Roll Over Beethoven’. So many nice 90s memories.  Another reason why you can tell this film is set firmly within the context of the 90s – one of the kids initially wants to name the dog MC Hammer. Hilarious.

Ultimately, this is a story about people and animals saving each other. Beethoven saves the family in many ways – he helps the eldest daughter gain the attention of her crush, helps the middle son defeat his bullies and gain confidence, and literally saves the life of the youngest daughter as she almost drowns in a pool. He also saves the adults – Beethoven senses that the two businesspeople are dodgy and takes steps to save the family from them. By ‘takes steps’, I mean, he engages in a great moment of slapstick destruction. It seems like Beethoven is doing all the work here. But when danger comes to him, the family is more than willing to step up (initially except the dad, but he comes around) to help him.

Beethoven is pretty heartwarming and not a bad film for kids, with some mature jokes thrown in for the adults as well, but also some darker moments and themes that might be a bit frightening. The direction is nothing to write home about (although there is a great Vertigo-style shot when Beethoven realises the youngest daughter is drowning), but where this film is exceptional is how it portrays the dog with such humanity. It’s the story of a loving relationship between a family and their pet, and I think lots of people can relate to that.