Bram Stoker’s Dracula (1992): “I am the monster that breathing men would kill.”

There have been lots of interesting and not-so-interesting films about vampires lately. The teenage vampire craze may have died down, but recently I chose to watch a vampire film made way before the craze began. If you’ve read the original book by Bram Stoker, then the plot of this film will be of no surprise. Bram Stoker’s Dracula (1992, dir. Francis Ford Coppola) tells the story of Count Vlad Dracula (Gary Oldman) of Transylvania, who lost his one true love after a hideous war in 1462. He vows to reject death, and to avenge her memory. Later, in 1897, young solicitor Jonathan Harker (Keanu Reeves) arrives at Dracula’s castle to assist him with real estate acquisition in London. Jonathan is engaged to the beautiful Mina (Winona Ryder), who looks eerily similar to Dracula’s lost love. Dracula leaves Jonathan at the castle in Transylvania to find Mina in London, and claim her as his own.

I’ll start by saying that Gary Oldman is fairly amazing in this film. He stars as the enigmatic Count Dracula, switching between young and old appearances depending on his blood intake. He’s completely unrecognisable underneath all the ancient-person makeup (which is done very artistically, no papier-mâché wrinkles here), but he acts right through it. Very impressive indeed. As young Dracula, he performs the seductive role well. Anthony Hopkins is also in this film, starring as the monster-hunting Professor Abraham Van Helsing – Dracula’s nemesis. He’s great in this, but in more of an understated way when compared with Oldman, whose Transylvanian accent lends an overtly dramatic quality to his role. There’s also a genius casting of Tom Waits as Renfield, Dracula’s former devoted subject.

Here is where the main issue of the film arises. Two of the greatest actors of recent times, Oldman and Hopkins, are paired with Winona Ryder and Keanu Reeves. Winona Ryder is not a bad actress, but in this film she looks like she’s acting in a pantomime. Her performance is very exaggerated, and her pretend-British accent is patchy and awkward. Keanu Reeves is as wooden as ever, and if Winona’s accent is slightly awkward, Keanu’s affected British accent transcends awkwardness on a universal scale. I can’t believe these two people were chosen to be in the same film as two legendary actors who are comparatively so impressive. It’s this kind of dichotomy that can throw you off whilst watching, but luckily the rest of the film is interesting enough to almost cancel them out. 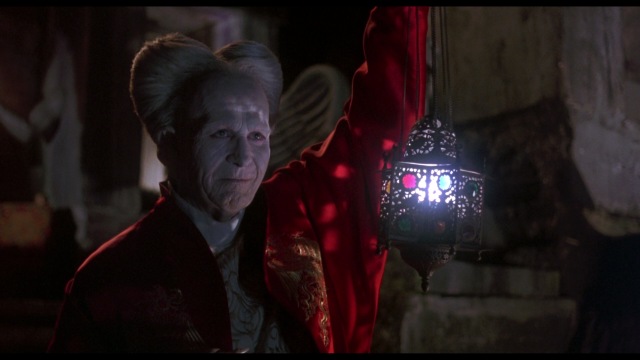 The story develops at a rapid pace with the assistance of visual tricks. There’s a constant narration by a couple of the characters, but there’s also use of shadow puppets, the standard map with a line travelling to show where the characters are heading, visual overlays and recurring visual motifs to remind you when a spooky presence is hanging around. What myself and the other viewers noticed, however, was that Coppola was extremely fond of using the visual matching technique to transition between scenes. I counted at least four visual match transitions, though other viewers I watched this with counted as many as six. This became a bit repetitive and, frankly, pretty funny. It would actually make a great drinking game. Despite having a very serious tone, which may have been effective when this was released in ’92, the film has dated to the point of being slightly melodramatic. Some of the key moments of the film have become so iconic that they have since been parodied in films such as Leslie Nielsen’s hilarious Dracula: Dead and Loving It (1995). Reflecting on them now, they just seem open to comedic interpretation. This isn’t necessarily a fault of the film itself, however.

The costuming and production design of Bram Stoker’s Dracula is beautiful. The sets and costumes are sumptuous and extremely detailed. The film won Oscars for Best Costume Design and Best Makeup, and was also nominated for Best Art Direction/Set Decoration – all of which the film is absolutely deserving.

Overall, this is not a bad film. However, it is excessively campy, and some of the actors (Winona and Keanu, I’m looking at you) are completely out of their depth in comparison to the massive talent of Oldman and Hopkins. Some of the visual tricks are heavy-handed to the point of being comedic, and have dated badly. But it’s a compelling film despite these problems. It’s still completely watchable, it’s just that certain moments will make you laugh rather than increasing the drama, as originally intended.