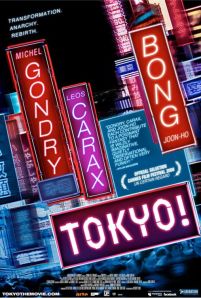 Tokyo! (2008) is a collection of three short films, tied together by their location and surreal overtones. Three visionary directors team up for this bewildering film, each needing no introduction whatsoever – Michel Gondry, Leos Carax, and Bong Joon-ho. Each of the three short films has its own visual quirks, and is set up in full movie format within the overall film, title cards, credits, and all.

I have to say that this film is the first film of its kind that I’ve experienced. I’ve seen short films on their own (a structure which I’m increasingly falling in love with nowadays), but never before have I seen three semi-unrelated films stuck together in the one film, linked only by their city and the prestige of their director. This triptych of films is not only incredibly strange, but totally spellbinding, each one adhering to a central theme – transformation, anarchy, or rebirth. This review will be structured in terms of each short film as a standalone unit, but with a score for the film overall.

This short film is based on a short story comic entitled Cecil and Jordan in New York, by Gabrielle Bell. It tells the story of a couple who are down on their luck and looking for employment and an apartment in Tokyo, whilst staying at their old school friend’s house. Hiroko (Ayako Fujitani) and Akira (Ryō Kase) seem to be a strong couple who love each other very much, and can weather any storm together. However, as Hiroko finds it more and more difficult to find a job and an apartment, and Akira becomes more successful and closer to her old school friend, she begins to feel jealous – will she ever find her place in life? Is it her destiny to be continually overshadowed by her creative boyfriend? As she begins questioning these issues, she begins to transform not only internally, but externally – with shocking results.

A lot of the discourse on this short film centres around its crazy conclusion. Spoiler alert – Hiroko begins to transform into a chair. Yes, a chair. Luckily, when someone like Michel Gondry directs such an insane concept, it almost does seem real. If this were handled by any other director, it probably would have failed miserably. We’re shown that Hiroko doubts herself so much that she perceives herself as a sort of unmoving object. She’s stuck whilst others are moving forward, and she’s just hanging around. She’s useless. However, by the end of the short film, we discover that Hiroko’s perceptions of herself have changed over time in her new ‘role’, and the ending is very heartwarming.

I don’t need to write much about Gondry’s direction for you to know that it’s great. It reminded me a lot of Eternal Sunshine of the Spotless Mind (2004) – particularly as Hiroko’s transformation begins. I think where this film shines, is its final sequence where we see Hiroko finally happy with her life. During the body of the short film, a sense of anxiety seems to fester as Hiroko’s situation grows worse and worse. But in those final moments, as Hiroko reaches happiness, you feel happy for her as well. It’s a testament to Gondry’s amazing skill as a director that he can make you feel like that about someone who turns into a chair. It really has to be seen to be believed.

We’ve seen Monsieur Merde (Denis Lavant) on this blog before – I reviewed Carax’s Holy Motors (2012) last year, which I absolutely loved. Denis Lavant is as repulsive as ever in this, Monsieur Merde’s film debut. We see him emerging from a sewer, and learn that he has become famous in Japan after being spotted numerous times and causing social disruption. On this occasion, Monsieur Merde goes too far and learns that there are legal repercussions for his violent actions. Or are there?

I was really hyped for this short film, as Monsieur Merde’s segment in Carax’s Holy Motors was a total standout, just because it was so strange. At that time, my mind was absolutely blown by what I then described as a “flower-eating, gibberish-speaking, physically repugnant leprechaun-like individual”. In this film, we see that there are more people like Monsieur Merde – which, now that I’m thinking about it, has repercussions for the world of Holy Motors as well. Their interaction with one another is somehow so stupid and so clever at the same time. If you’ve seen it, then you’ll know what I’m talking about.

I really liked Merde, but it wasn’t my favourite short film out of the three (Gondry wins that honour). At times, it seemed to drag. But I wonder if this is just because I’ve seen the famous Monsieur in another film before, and I knew what to expect. I wonder if I’d seen this one before Holy Motors, whether I would have been just as stunned as I was the first time I saw him. In other respects, this short film is great – obviously its direction is amazing because Leos Carax is a genius. There is one long tracking shot as Monsieur Merde is ruining a street filled with luxury shops, which is just astounding. ‘Crazy’ is the key word for this short film. ‘Anarchy’ is its central theme – a theme which Monsieur Merde fully embodies in his character, and as we come to learn, in his system of moral understanding.

This short film focuses on a young man who introduces himself as a hikikomori – translated as an ‘adolescent shut-in’, or a social recluse. He hasn’t set a foot outside of his house for ten years. He orders food and supplies over the telephone, and when these are delivered, never makes eye contact with the person at the door. He chooses to sit inside and read all day, or just stare at nothing. On Saturdays, he orders pizza, and on this particular Saturday, he catches the eye of the beautiful delivery girl. As he does so, a massive earthquake strikes Tokyo and she faints inside his apartment – and he falls in love with her. Shaking Tokyo chronicles the hikikomori‘s need to escape the house, to thwart his agoraphobia, and to find this girl who has bewitched him.

Bong Joon-ho’s direction in this short film is so effective. He makes sure to take in all the minutiae of the hikikomori‘s environment – the naked toilet paper rolls, the pizza boxes, the books, the bottles of water. The visual environment is set up like an inventory of his provisions, and when watching, you get a sense of orderliness to the point of claustrophobia. Bong Joon-ho’s direction also succeeds in its use of light. During a key moment of the short film, the light overpowers the scene and we’re put inside the shoes of the hikikomori as he steps outside of his house for the first time in a decade. The feeling is overwhelming, and as the hikikomori describes his physical symptoms, you can’t help but sympathise with him as the light of the film blinds you.

When reading about this film within the context of the triptych, I get the feeling that it’s the least talked-about one. It has a fairly ambiguous ending, which some people may dislike, but I felt that it was overall really successful in capturing a moment of time in the world of a person whose life exists of endless time inside their house. The actor, Teruyuki Kagawa, also succeeds in delivering a performance that is devoid of stereotypical ‘shut-in’ behaviour, but is characterised by quirks that have seemingly naturally developed over the ten years of his hikikomori lifestyle. Top marks.

In conclusion, I loved this film both in terms of both its separate parts, and its connected whole. Even though the stories don’t have much to do with one another, their vague commonalities seem to naturally make you feel as if it’s obvious that all these stories occurred in the same place and time. If you have difficulty watching ambiguous stories that are overtly surreal and completely strange, you might have some trouble with this film. But if you enjoy films that defy your expectations as well as showing off the amazing talent of three legendary directors, I’d highly suggest giving this one a watch.