Based on the memoirs of Joan Crawford’s daughter Christina, Mommie Dearest (1981, dir. Frank Perry) tells the story of the legendary actress’ relationship, or lack thereof, with her children. It begins with Crawford longing for a child, but as she is unable to become pregnant, she decides to adopt; first a girl, then a boy. The film then follows the development of Christina’s relationship with her mother as she grows up and becomes an actress herself. Although initially Crawford’s relationship with her children is fairly positive, it descends into fierce competition, manipulative behaviours, and physical and verbal abuse.

I was inspired to watch Mommie Dearest after watching the finale of an older season of RuPaul’s Drag Race, where the iconic “no wire hangers!!!” moment was referenced. To be honest, I’m not surprised that I was convinced to watch this film by a fabulous drag queen. I have never seen a draggier performance by a non-drag queen before in my entire film-watching life. Faye Dunaway is the very definition of camp as Joan Crawford. She should have earned a PhD in scene chewing after this masterpiece of mastication. In fact, after its release, Variety magazine described her performance: “Dunaway does not chew scenery. Dunaway starts neatly at each corner of the set in every scene and swallows it whole, costars and all.” At times it can be really overwhelming, but over time, this overacting almost becomes a symptom of Crawford’s need to be the perfect actress at all times.

What I really loved about this film was the opening credits sequence. The film takes its time until we get to see Dunaway’s face in full Crawford getup, with the giant drawn on eyebrows and pouted lips. But the setup perfectly prepares viewers for what they’re about to see throughout the rest of the film: a perfectionistic maniac. In these first moments, we watch as Crawford wakes up, ferociously scrubs her arms and fingernails with soap, douses her face with scalding hot water, and then again with rubbing alcohol and ice water. This is a sequence of self-abuse in the name of cleanliness, ritual and preparedness. Without knowing what’s going to happen next, it seems a bit extreme. But looking back, this was the perfect setup to the film as a whole. Mommie Dearest is the perfect portrait of Joan Crawford’s obsessive compulsiveness in contrast to her composed public persona; illustrated via this morning ritual, Crawford working out and running until she moans in pain, her cleaning and floor-scrubbing mania, and her destructive relationship with her children. 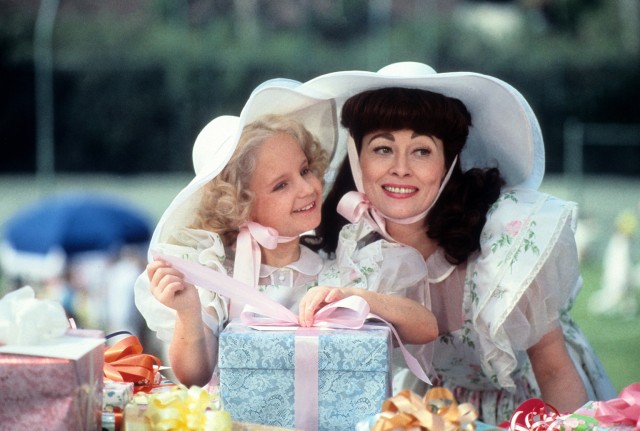 It is clear from what I’ve written so far that Dunaway absolutely dominates in this film. But I was also quite impressed by the performance of her daughter Christina as a young girl (Mara Hobel). Her portrayal of an abused and terrified child was so convincing that it was fairly disturbing. However, when acting as a happy child she had the tendency to look a bit robotic. I wonder whether this was intentional to show how the children were trained to act happy in the public eye. Unfortunately the older actress for Christina (Diana Scarwid) is not as convincing, and was a bit wooden. Thanks to Dunaway I can’t even remember much about any of the other actors. I really liked the illustration of the insecure attachment that the children had with their adoptive mother. However, I think there must be other films out there that illustrate these types of relationships in a more measured, contemplative, and nuanced way.

The direction, music and cinematography is pretty unremarkable, aside from the wire hangers scene where all three combine and succeed to create something completely frightening, like a horror movie. The costume design was quite nice but nothing to write home about. One big issue with the story development of Mommie Dearest, aside from some elements of the acting, is that there’s no real marker of time passing. When an amount of time does pass, and actors change as the children grow up, it seems awkward and sudden.

Even though this film is almost relentlessly uncomfortable, it is definitely a camp classic that has to be seen to be believed. It’s at least an interesting exploration of the horrific childhood that Joan Crawford’s adopted children experienced. As it’s based on one child’s perception of her relationship with her mother, who knows whether these events are accurate and true without further investigation, but it is a pretty compelling story nonetheless. Mommie Dearest makes for a passable dramatic film with a couple of key moments and cheesy performances that will be referenced by many drag queens for years and years to come.