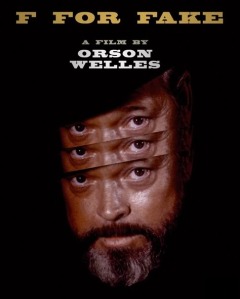 Kind of incomprehensible, yet quite profound, and also clearly a convenient vehicle for director Orson Welles’ blatantly huge ego, F For Fake (1975) is summarised by IMDb as “a documentary about fraud and fakery” – but it’s much more than that. It’s a multilayered film with a number of stories all happening at once: one about famed art forger Elmyr de Hory, and about a ‘hoax-biographer’ named Clifford Irving, then Orson Welles himself, then Howard Hughes, and Welles’ lady companion Oja Kodar gets her own narrative as well. All of these stories and narratives are woven together to create a sort of manifesto and essay in film format about counterfeit art, faking, forging, and the question of what art really is, and whether it can have any value at all if it can be reproduced.

I have to confess right now and say that I fell asleep twice during this film, somewhere in the middle. But they were microsleeps, so I feel qualified to review this film whilst keeping them in mind as part of the viewing experience. F For Fake starts out strong – an amazing pastiche sequence of model Oja Kodar wandering through the streets of Rome in a miniskirt with footage of countless men doing double-takes when she walks past, or watching her surreptitiously, not knowing that they were being filmed whilst doing so. This really sets you up for a strange experience. But somewhere in the middle, at the apex of its unashamed confusion and mash-up of characters, I started feeling sleepy. Luckily, by the end, I was fully awake again, because the final scene is an exercise in futility that manages to be simultaneously completely funny and satisfying. 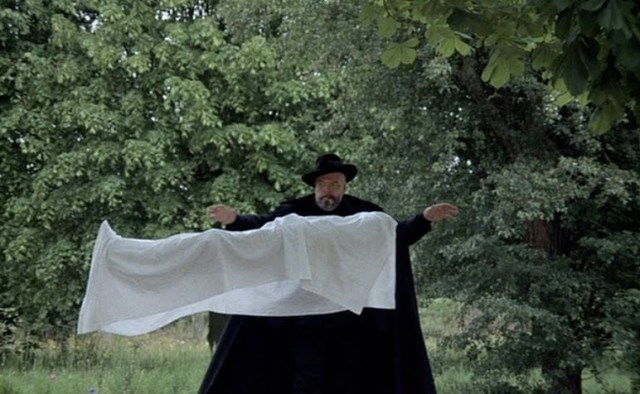 My favourite thing about this film, apart from its erudite discussion on the merits of art in a culture of fakery, was how so much of it contained scenes that were incredibly self-indulgent. Occasionally there’ll be an amazing scene showing Elmyr de Hory free-hand sketching something that looks exactly like a Picasso, and then we’ll see Welles smiling with his characteristically charming face towards the camera, speaking some narration directly to the viewer as if we’re having a jovial conversation together. Occasionally a nice glass of wine is involved, of course. It happened several times and became pretty funny by the end. However, other than this, I did really love the film’s strange, choppy editing style and use of different types of film stock. The overall effect was quite intriguing, and bewildering. I also ended up learning some interesting things about counterfeit art, which is always useful to be aware of (maybe).

Even though this film did lose a bit of its steam somewhere around the middle and made me feel quite sleepy, F For Fake is ultimately a very interesting film that teaches its viewers a thing or two about counterfeit art, and fakes and forgeries throughout the ages, and how these correlate with the experience of creating and engaging with art. Exploring fakes through a number of different characters was a good way to approach the issue, and there are a number of key, thematically innovative scenes that stand out from the rest, which you might remember more than the overall message of the film. If anything, it’s always nice to spend some quality time with Orson Welles, who consistently makes the viewer feel like an honoured guest at a party. F For Fake is a very unique viewing experience, if you can make your way through the whole thing without falling asleep like I did.