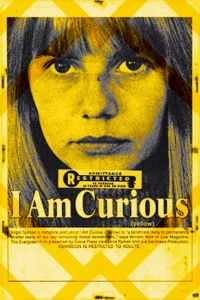 One of the most controversial and scandalous films of 1967, I Am Curious (Yellow) follows a multi-layered narrative, structured as a film within a film. The film’s synopsis is as follows:

Lena, aged twenty, wants to know all she can about life and reality. She collects information on everyone and everything, storing her findings in an enormous archive. She experiments with relationships, political activism, and meditation. Meanwhile, the actors, director and crew are shown in a humorous parallel plot about the making of the film and their reactions to the story and each other. Nudity, explicit sex, and controversial politics kept this film from being shown in the US while its seizure by Customs was appealed.

The film begins by informing the viewers that this is a film of two parts – I Am Curious (Yellow) is followed up by I Am Curious (Blue), which was released in 1968 and was initially meant to be combined with this one to form a three and a half hour long masterpiece; the combination of colours being representative of the Swedish flag. Lena Nyman, our heroine, and Vilgot Sjöman, the director of the film, shout out at the viewers to buy the film and watch the second one, since it’s the only film ever made in two parts! I have to say that this was probably the perfect way to begin the film, because it sets the viewer up for the strange experiences that are to follow in terms of the film-within-a-film construction. For example, when one of the ‘actors’ fumbles a line, Vilgot as the director will call out the correct phrasing, then the crew will start the scene again and the film will continue as usual. Or, when Lena is having trouble perfecting a yoga pose, we return to behind the camera to watch the crew attempt the pose as well. It’s a strange and humorous experience, but an entirely unique one as well.

Lena Nyman shines in this film, as the 22 year old film student starring in a film, who’s in a relationship with her director outside of the film, and also as the young activist continually on protest within the film. In her interviews with random people on the street – which range from topics such as class structure in Sweden, to the Spanish civil war, to womens’ rights – she shows so much passion that it almost overshadows her love scenes with her paramour, Börje (Börje Ahlstedt). She shows a stunning amount of complexity as a character-within-a-character, in a film-within-a-film, where she’s trying to free herself from the social expectations of intimacy between men and women, but also can’t help but become jealous when her lovers become interested in other women. Lena is portrayed as a full and dynamic human being with flaws, desires, contradictions and complexities, and is supremely watchable. 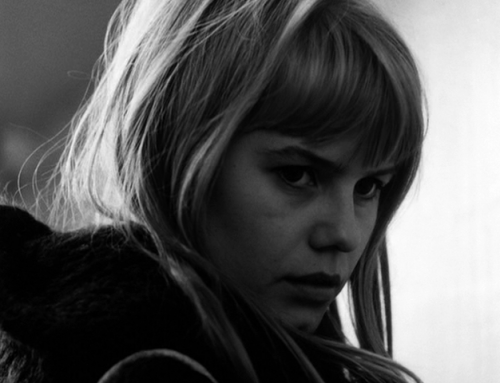 The editing of I Am Curious (Yellow) is quite choppy and abstract, with a lot of jump cuts, although the parallel stories are quite linear (even though they do intersect at points). The film is shot in black and white, and had some incredibly beautiful use of light and cinematography that reminded me of some of the French New Wave films. The creative elements all unite to form a film that is just as complex as its protagonist. For example, occasionally when one of the interviewees on the street says a key term such as ‘sabotage’ or ‘fraternity’, that word will flash up on the screen in big white letters, although we’re never told why. This results in the political overtones being enhanced, reminding the viewer that these are the categories of issues that young people were facing in the late 60s in Sweden. The overall feeling I got from this film after I finished watching was similar to my reaction to Daisies (1966) – bewilderment and awe at the visuals, and a massive amount of respect that the film was able to so bluntly display its raw sexuality and political ideals.

It goes without saying that there are many sex scenes and a lot of nudity in this film. However, it also must be noted that at no point does the sex or nudity look pornographic or exploitative. It’s always framed within the context of a genuine relationship between Lena and Börje, and from the perspective of Lena who wants to know more about life, and know more about herself sexually. In this way, some of the scenes can be a bit confronting. If you feel awkward or uncomfortable when faced with nudity or lots of sex scenes in films, this isn’t your film.

I Am Curious (Yellow) is a film that smashed the glass ceiling in terms of showing sex in non-pornographic films, and for that, it’s definitely a groundbreaking, significant work. Some viewers might shy away from such frank displays of sexuality on screen, or find its structure and creative elements pretentious or difficult to understand. For me, this film was really refreshing and an interesting insight into the sexual politics of late 60s Europe. But it’s not all about sex and sexuality; the political overtones are fascinating and it’s surprisingly funny in parts, and Lena Nyman is the perfect lead. Its honesty and authenticity is probably its best asset. I can’t wait to watch I Am Curious (Blue), and see the further development of Lena’s sexual and political identity.

This review is a part of the “1967 In Film” Blogathon, hosted by Silver Screenings and The Rosebud Cinema. Check out the whole list of films here!