The Fault In Our Stars (2014, dir. Josh Boone), adapted from the book of the same name by prolific young adult author John Green, is, as the poster states, one sick love story. Hazel Grace Lancaster (Shailene Woodley) is a seventeen year old girl who has terminal thyroid cancer, but lives an otherwise normal life. She spends her days reading the same book over and over again, and her mother (Laura Dern) thinks she’s depressed. She sends Hazel to a cancer support group for adolescents, and Hazel begrudgingly attends. It is here that Hazel meets Augustus Waters (Ansel Elgort), with whom she immediately has a combative yet magnetic relationship. After the meeting, they spend some time together, which turns into spending a lot of time together. This film charts their relationship as they read books together, discuss life, and experience love.

Shailene Woodley is the absolute star of this film as Hazel Grace Lancaster. Every moment of her time on screen is authentic and natural, even if it’s just a montage of her checking her phone to see if Augustus has texted her. When it comes time for Woodley to portray intense emotions such as anger, grief, happiness, or love, she is completely mesmerising. There is a lovely amount of chemistry between her and Ansel Elgort, as Augustus Waters, who is also great. The two are portraying pretty normal teenagers who are facing an uncommon experience, and they manage to keep a very deft balance between normal and abnormal, particularly when discussing the existential aspects of their cancer experience. As a result of these two excellent actors and their down-to-earth performances, the content of this film doesn’t make its way into melodramatic territory, even though the central story is extremely emotive, and has the potential to be very upsetting.

In terms of the supporting cast, Laura Dern and Sam Trammell play Hazel’s parents, and whilst we don’t get to see too much of Trammell, Dern is excellent. Nat Wolff also puts in a great performance as Hazel’s and Augustus’ friend Isaac, who is blind as a result of cancerous tumours in both his eyes (even though he’s often the comic relief as a result of his blindness, which I’m not entirely sure I find funny). Willem Dafoe is also in this film as reclusive author Peter van Houten, whose book Hazel adores and obsessively reads. Dafoe’s scenes initially feel intensely awkward to watch, not because of any fault by him or the others, but because his character acts in a horrible manner. But Dafoe is the master of handling awkwardness in a constructive way, to the benefit of the overall scene, and his performance manages to ensure that he is one of the more memorable supporting cast members of the film.

However, the script does suffer from a bunch of cheesy dialogue, which is largely ripped straight from the pages of the book. At times the script and the actions of characters (such as Augustus, who keeps an unlit cigarette in his mouth to thwart death) seem pretty silly and ‘young adult fiction’-y. Luckily, Woodley and Elgort manage to almost render this cheesiness null with their performances. And even though there are cheesy parts, the story does develop in a realistic manner. Woodley and Elgort manage to trick the viewer into believing that these are two real people, rather than two characters out of a young adult fiction novel.

What is wonderful about the script, and about The Fault In Our Stars in general, is its approach to communicating information about cancer as it relates to the lives of these two young people. Hazel has to bring an oxygen tank in a rolling backpack with her, due to her reduced breathing capacity, and one of Augustus’ legs has been amputated as a result of osteosarcoma. However, this isn’t the central issue of the story, it’s just something to take into account when watching. It’s not your typical story about cancer, where cancer is the absolute focus point and the ultimate villain to overcome. It’s a film about people who happen to have cancer, not about people who are necessarily confronting cancer. That’s the ultimate triumph of this film. Life is unfair for these kids, but this film is more about the characters themselves than this injustice that has affected them for the rest of their lives.

The creative elements of The Fault In Our Stars are quite excellent also. The direction by Josh Boone and cinematography by Ben Richardson work together to create a film that looks just like any other normal film, but with some beautiful framing and establishing shots that just make the film a visual success. There aren’t any special camera tricks or experiments, and the overall result is something simple. But it excels at its simplicity because it allows the story, and the acting talent, to shine through. When text messages appear on screen, they appear in a cute cartoony animation that emphasises the fact that these are two young people having a conversation together, which I really liked. The soundtrack is also filled with great song choices, and anthemic, dreamy pop music throughout. 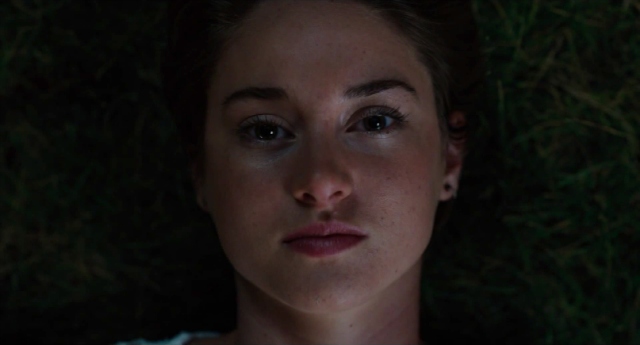 This “Is it worth paying for a ticket?” series takes into account both the film and the cinema experience before doling out a ‘yes’ or ‘no’ answer, in order to assist people to figure out whether it’s worth rushing out to see a film in a cinema, instead of waiting for a DVD or Netflix release. As a result, I’d like to discuss what it felt like to be present in a cinema during this film. It’s clear that the fans of this film are incredibly passionate. And that’s not necessarily a bad thing, until it comes to the point where literal screeching from young women begins to interrupt the film-watching experience. It reminded me of watching the Twilight films in the cinema. Every time a character did or said something that was significant to the book, or significant to the film’s huge internet fandom, hordes of young women made guttural, non-verbal screaming and gasping noises. I heard this one girl yell out, “I just can’t!” and “I literally cannot deal!” on two separate occasions. This was very distracting throughout the entire film, although it did calm down a bit by the end, maybe because everyone was trapped within a paroxysm of weeping. If you find this behaviour aggravating, you might need to avoid seeing this film for a couple of weeks until all the fans have seen it already, or you might have to wait for an alternative method of seeing it.

The Fault In Our Stars is ultimately a film about how people choose to make meaning out of their experiences. Having read the book, and knowing what happens in the end, I had an understanding of how sad this film was going to be (a film about kids with cancer falling in love – how could it not be supremely upsetting?). However, this film surpassed my expectations. Shailene Woodley was amazing, and her chemistry with Ansel Elgort was a highlight. Even though my experience in the cinema was not entirely positive (definitely something to keep in mind if that’s something you prefer to avoid), and even though there are moments of cheesiness that are definitely regrettable, I would say this film is absolutely worth seeing in the cinema. Just make sure you bring some tissues.

Is it worth paying for a ticket?: Yes.
Watch the trailer here.