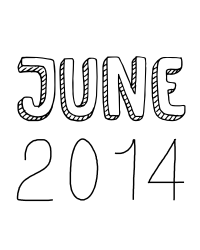 Another month has passed, and I’ve collected more links and interesting things to share! June was a pretty good month. I actually just got a job in my field (as of yesterday), so I would say it was a pretty productive one! That’s my new years’ resolution over and done with. I have lots of great links to share so I’ll get right into it!

Firstly, more wonderful things from one my favourite design blogs Moss & Fog. They just keep sharing really strange and fascinating things lately. This month they did posts on holographic chocolate that looks weird and delicious, and a graph about how the world’s population would look if it consisted of just 100 people, both of which I really loved.

Over at Black Is White, Davide made a list of the most visually stunning films of the 20th century, which is such a great list and (true to its name) is filled with some truly beautiful looking films. I’d only seen about half of them so now I have whole bunch to add to my watchlist (which just keeps expanding).

Despite having a deathly fear of cannibals, I really enjoyed reading Mikey‘s friend Denis’ review of The Green Inferno, acclaimed horror aficionado Eli Roth’s newest film. Haven’t seen the film yet, but it sounds like it might be a good one.

I participated in Silver Screenings‘ “1967 In Film” Blogathon this month, which was a really excellent one. I loved reading everyone’s reviews because 1967 really was a fantastic year for film, a fact which I hadn’t really been aware of before. I wrote about I Am Curious (Yellow), which was a pretty awesome film (I’m also kind of stoked that the director’s son commented on that post).

I also participated in the awesome Niall‘s Royale With Cheeseathon to celebrate the 20th birthday of Pulp Fiction (1994). There are lots of amazing posts on this classic film here. I wrote about five random things that I love about the film, which was a fun post to compile.

One of my favourite blogging events of all time, the splendiferous Shitfest over at Isaacs Picture Conclusions, is starting up again for summer! Here’s the opening ceremony post with lots of creative images. I don’t know about you guys but I think Shitfest Summer 2014 will be the best one yet. The film I watched was super horrible so I can only guess at how bad everything else will be. Oh, and if you want to read what film bloggers come up with when Eric asks them to send him a piece of writing about Jessica Biel’s boobs, here you go. Pretty great stuff, and surprisingly insightful.

Unfortunately, Game of Thrones is all finished, until nine months into the future when the fifth season rolls around. Sati of Cinematic Corner‘s Game of Thrones recaps were a highlight for me during the ups and downs of this scandalous season. Sati also wrote an excellent post about a certain character that was excluded from this season (“LS” for all you book readers), in a very thoughtful and specific post here. But don’t read that post if you haven’t read the books! Melissa of Snap Crackle Watch!’s recaps were also my faves this month. Part of the reason why I’m sad about Game of Thrones being over is that I don’t get to read more of these awesome posts from two very passionate fans. Can’t wait til next year!

I’d like to give a huge shout out to Alex Raphael who is pretty much the coolest. His blog is truly awesome and has something for everyone, so it’s well worth checking out if you haven’t already!

Lastly, a very happy first blogiversary to Cara, whose blog Silver Screen Serenade is one year old as of June 21st! Her Blogiversary Bash has been going great guns, and you can check out all the posts for it here.

I hope everyone had a really lovely June. Here’s to an equally excellent July!