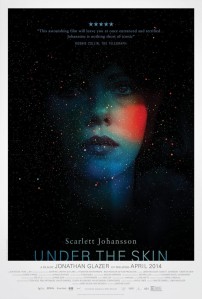 Finally released in cinemas after ten years in development, Jonathan Glazer’s Under the Skin (2014) is a film that will stick in your mind for a very long time. It tells the story of a beautiful female alien (Scarlett Johansson) who arrives in Scotland with a job to do. She is charged with the task of seducing lonely men and taking them to her home, but for what purpose? Over the course of the film, one of her conquests leads her towards a process of self-discovery that neither she nor the audience would ever have predicted.

I saw Under the Skin a little while ago, and I haven’t stopped thinking about it since. Something about it that has stuck with me and caused me to think about it at random times of the day – the amazing score by Mica Levi, Scarlett Johansson’s minimal yet very communicative performance, the bleak landscape, and its strange and haunting ending. This is one of those films where all the creative aspects fit together perfectly and there isn’t anything out of step. The cinematography is absolutely stunning and really shows off the beauty of rural and seaside Scotland. The direction by Jonathan Glazer is alternately beautiful and brutal, kind of like the alien herself. One scene where a baby is left out in the cold on a beach lingers for just a second too long, and you can tell that Glazer wants to make people feel a distinct amount of discomfort. I loved his shotmaking and his minimalistic storytelling. His direction during the final scene of the film was completely mindblowing.

One thing I worried about as I was watching this film though was the way the story was about to develop. About one third of the way in, I assumed that the film would be repetitive, and filled with numerous scenes where Scarlett Johansson as the beautiful alien seduces and disposes of many young men. But this act of the alien seducing the young men, and the fact that it’s done a number of times, is portrayed eventually quite minimally so that the audience doesn’t get bored with it. This is the alien’s job, so she’s bound to be shown doing it a number of times, and I felt the way this was handled was quite clever. I was really wrong in thinking that the pacing might stall. Under the Skin is not just about a sexy alien, and it focuses on a different aspect of the alien’s existence and self-perception from the mid-point onwards. Plus, once you find out what actually happens to the men that she’s seducing, you feel so repulsed that you almost can’t look away.

Scarlett Johansson carries this film as the main character, the alien, who hardly ever speaks. In fact, the majority of the dialogue comes from scenes where the alien is luring men into her car and onwards to her house. Some people might be interested to see her numerous nude scenes, but these are done in such a clinical way that they never feel sexual or gratuitous. I’ve never seen Scarlett Johansson in a role like this before and I’m way more interested in her now as a result. She perfectly conveys what it presumably feels like to be an alien within a human shell, attempting to look, talk, and act like a human but clearly having the mind and physical perception of something unhuman. She communicates all of this information through nuanced and subtle facial expressions and physical movements that you almost miss out on if you’re not paying attention. This is an incredibly complex character and Johansson completely pulls it off.

This was a great film to watch in the cinema because having the amazing imagery up on a big screen with the sound design and musical score blasting through a surround sound system was so immersive. Because there isn’t much dialogue, sometimes it felt like a bit of sensory overload, as the music and visuals almost replace the dialogue and are relentless. There is also so much tension at times in this film that I almost wished I had a remote control to pause it for a couple of moments to compose myself. The pacing is tenacious, and some moments are just brutal; not necessarily in a violent way (although there is some of that), but in a massively bleak and depressing way.

I really loved this film for reasons I can’t definitively pinpoint. It ticked all the boxes in terms of the films that I like – generally introspective with a strange story and beautiful music and visuals. Scarlett Johansson’s performance was mesmerising and will bewitch the viewers of this film just like the men she picks up off the side of the road. But what impressed me the most about Under the Skin was how it made me feel as the credits were rolling – my mind was absolutely blown and I was totally unable to express it verbally. This film will undoubtedly polarise viewers due to its method of storytelling, its themes, and its more graphic moments, but is it worth paying for a ticket for it? Absolutely.

Is it worth paying for a ticket?: Yes. (But not if you get fidgety in films that don’t have a lot of dialogue.)
Watch the trailer here.