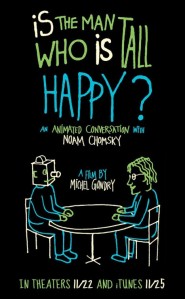 Director Michel Gondry’s newest mindbending masterpiece, Is The Man Who Is Tall Happy? (2013) communicates a series of conversations between Gondry himself and famed linguist, philosopher, and political activist Noam Chomsky. These conversations are brought to life through spirited animations that reflect Gondry’s surreal view on life, and contain questions about human nature, evolution, language, learning, and the relationships that humans have with one another.

I saw this at the Melbourne International Film Festival in a massive theatre that was completely sold out. I’m assuming that it’s the lure of the Gondry that drew such a massive crowd, because I couldn’t imagine that huge amount of people generally would seek out a film like this, even though a discussion between two bright minds is always interesting. At times the discussion became so cerebral that my friends and I lost track for a moment. With that in mind, I can’t imagine this film being an extreme commercial success. The film is essentially a really in-depth conversation with animation representing it on screen, and some people might find that really tedious, but I enjoyed it a lot!

What’s really interesting about this film, and the fact that Gondry is narrating the conversation and occasionally popping in with insights about his perception of it, is that Gondry himself admits to the audience that he gets lost as well. Occasionally, there is a break in the animation where Gondry’s handwriting flies across the screen, telling us that he had to take a break because he didn’t understand what Chomsky was saying to him, or that Chomsky didn’t fully understand Gondry’s question due to his thick French accent, and the conversation went in a different direction than what he had expected. These breaks in the film are really refreshing because it reminds the audience that the filmmaker isn’t the font of all knowledge. He’s just a person like us, who wants to know more about the world, and might struggle a bit in the process of knowing as well. 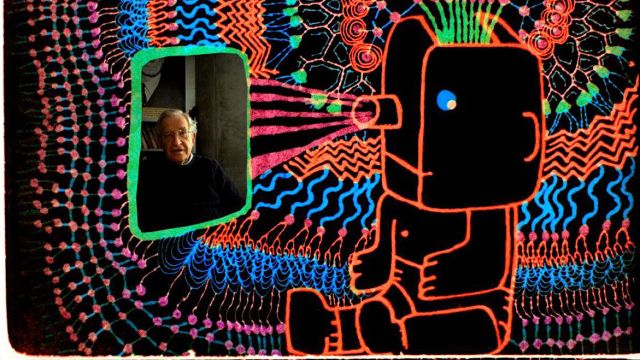 The animation is all done by Gondry’s own hand and is really quirky and strange. It’s difficult to describe, but it ensures that your eye is always moving. Images are continually moving across the screen, whether it’s a person walking or bicycling, a dog running around, Gondry’s handwriting as it’s being written, or psychedelic patterns and shapes growing and retracting. Gondry states in the film that he wanted at least 98% of it to be animated. The remaining 2% is made up of little snippets of Chomsky and Gondry on film, and a very brief clip of two other people who crop up towards the end.

What I loved the most about this film were the insights into Chomsky’s personal life and childhood that shed some light on the kind of formidable thinker that he has become. We learn about how he read his father’s PhD dissertation at the age of twelve, and about his experiences with anti-Semitism as a young child living in a fairly unfriendly neighbourhood, and how these experiences shaped his future thinking and career. Above all, this film is a dynamic, constantly moving work of art. It might require two views for the high-level academic concepts to be fully understood (at least, that’s what I would probably need), and this will probably alienate a lot of people.  But in the mean time, it’s so worth it to watch and be dazzled by the amazing animation as it relates to the metaphysical and metalinguistic aspects of the human experience.