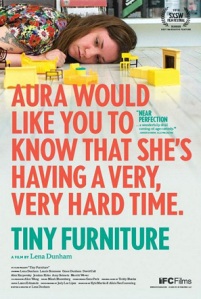 Lena Dunham’s directorial debut, Tiny Furniture (2010) is an independent comedy/drama about a young woman named Aura, played by Dunham herself, who returns home after graduating from college and is set the hard task of finding out where to go from there. She moves back in with her mother Siri (Laurie Simmons) and her sister Nadine (Grace Dunham), and refamiliarises herself with old friends, whilst simultaneously attempting to figure out what life is all about in the post-college universe.

I went into this expecting something a little bit similar to Frances Ha (2013), which is also a film about a girl trying to make her way in the world as a young person with big ambitions. But I think I enjoyed Frances Ha more than this one. If you’ve seen Lena Dunham’s successful television series Girls, then you’ll already know what Tiny Furniture is fundamentally about: privileged young (white) people doing stupid stuff with an inflated sense of entitlement. I have a big problem with stories/people like this and I find them really frustrating (even though I willingly watched all of Girls and found some of it quite funny). A warning: If you really hated Girls, you’ll probably really hate this, and you should probably avoid it altogether.

But I have to say, as with Girls, the best thing about Tiny Furniture is the script, which is peppered with funny moments that make you smile, and some funny moments that make you laugh out loud. Some of the observations on social situations and random people are really witty and sharp, such as when a friend is described as “a little bit famous… in an internet kind of way”. This levity is mixed with a darkness that goes beyond black comedy and almost into bleak, depressing territory. That’s the thing – the script for this is great. The story, however, can be a bit dull and purposeless. But you could generally say that of some individuals’ – and definitely of Aura’s – post-college lull period between graduation and employment. My issue is that I only want to see that kind of story done well, and occasionally in Tiny Furniture this point is laboured at the expensive of the overall story development and enjoyment.

The cast of Tiny Furniture is very similar to the cast of Girls. Lena Dunham plays Aura, a bit of a Hannah Horvath-type character who leeches off her successful photographer mother for cash and a place to stay, taking advantage of her generosity but also insisting on helping her when she doesn’t really need it. Jemima Kirke plays Charlotte, a character very similar to Jessa in Girls – a wise, world-weary pill-popper with a penchant for pushing the boundaries of those around her. Alex Karpovsky, who plays coffee enthusiast Ray on Girls, puts in an appearance as a Youtube star who makes weird videos where he reads Nietzsche aloud whilst riding a rocking horse and wearing a cowboy hat. All of these characters are frustrating to watch in their own ways and are by and large pretty annoying for a variety of reasons. Again, if you really dislike Hannah on Girls, you’ll really dislike Aura because these characters are almost exactly alike, although Aura is less neurotic. My favourite actor was Grace Dunham, who is Lena Dunham’s sister in real life and plays her sister Nadine here. Her performance is blunt and very deadpan, and is probably the funniest overall. It’s just a shame that she doesn’t get that much screen time.

The music is one of the worst elements of the film, except for the song over the credits which was a great choice. Some of the soundtrack sounds like stock music, and sometimes like someone is just pressing random keys on a synthesiser. This was really distracting and annoying, and stuck out like a sore thumb compared to the other creative elements of the film, which are of quite high quality even though this is a pretty low-budget independent film. Given the budgetary constraints, I can almost understand why the music would be the missing piece of the puzzle, but at the same time I’ve seen lower budget films with excellent music so that isn’t really an excuse. But in terms of the film as a whole, the general entitlement and detestability of the characters is way more offensive than the music. The direction is also nothing to really write home about. Although it is fairly well directed, there’s nothing that makes sure this film stands apart from others.

It seems like mumblecore as a genre is dominated with stories like this – post-college young people trying to figure stuff out and generally being entitled and annoying whilst doing so. Maybe it’s a fact that most young people post-college are all annoying and entitled (note to self: further research needed), and that’s why there’s so many films about it. In that sense, Tiny Furniture is an achievement. I can understand Aura’s disoriented nature and instability, but I’m repulsed by how annoying she is. Tiny Furniture isn’t a bad film, and I actually quite enjoyed it. But for those who find these types of characters frustrating, it can be a painful experience at times. I sure hope I wasn’t like this after I graduated.