Today I watched two short films, both of which were surreal and amazing, but very different from one another.

Midnight Parasites feels like one of those short ‘films’ out of Sesame Street where everything is repetitive and artistic and is intended to teach kids something, but yet it also feels like the weirdest, most disturbing Sesame Street short that you’ll ever see. Strange, out of tune organ music accompanies crude animation and repetitive sequences where strange creatures fly, swim, and walk through a macabre wasteland – where trees and clouds have eyes, and dead/decomposed bodies litter the ground. The premise must have some deeper meaning but I was too blown away by the weirdness to make sense of it. The art is apparently inspired by the genius Hieronymous Bosch, and I can absolutely see that influence. The visuals are simultaneously mesmerising and disturbing in their constant evolution. I actually really loved this because I love random and weird things, but I feel that this may be too weird for some people. If you’re able to find this on the internet somewhere, definitely watch it. 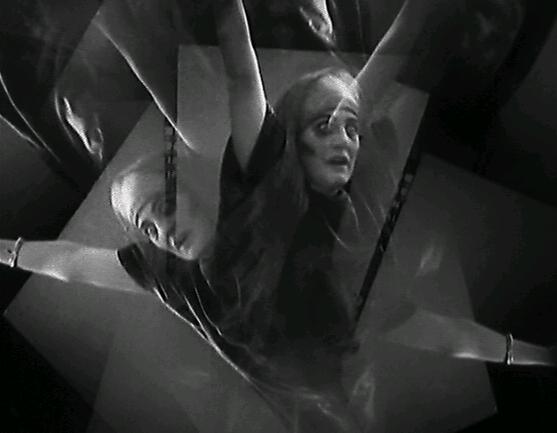 The Fall of the House of Usher (1928)
James Sibley Watson & Melville Webber, 12 minutes

A highly experimental short film based on the story of the same name by Edgar Allen Poe, The Fall of the House of Usher is very creepy and atmospheric. I can’t tell you more about the story other than that it’s about a family curse, and a brother and sister who are affected by the curse. There’s no audible dialogue nor title cards to show any dialogue, so you almost have to have an idea of what the original story is about in order to make sense of the film. But the visuals in this one are fantastic, with a lot of experimental (for the time) techniques such as mirroring, reflecting shots with water, and angular, strange shapes being made with shadows and light. The cinematography, editing and set design (as well as make-up and costuming) reminded me a lot of The Cabinet of Dr Caligari (1920), and of German expressionist film in general, even though this was an American production. Pretty amazing stuff.