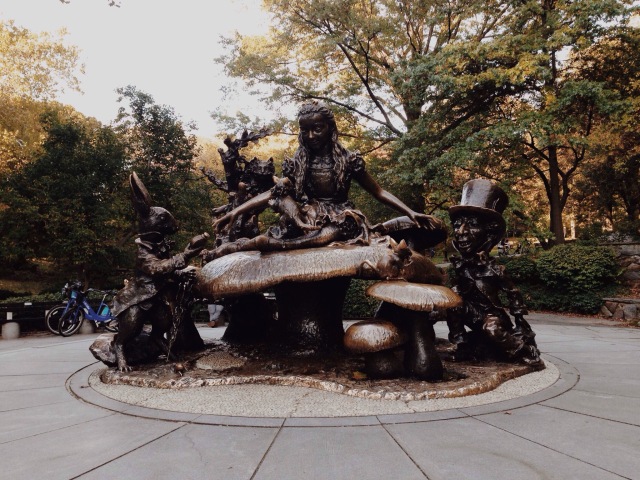 Nestled away in the heart of Central Park lies a big, bronze statue of Alice in Wonderland, with her friends the Mad Hatter, the dormouse, the White Rabbit, and the Cheshire Cat. This sculpture was designed by Hideo Sasaki and Fernando Texidor in 1959, and is designed so that children can climb up on it and sit in its nooks and crannies. A whimsical surprise in the middle of beautiful, lush parklands, it’s located in the middle-east section of the park, and is quite difficult to find if you’re approaching from above as it’s shielded by trees and shrubs. It’s located directly next to the Conservatory Water lake.

This statue is pretty gorgeous in real life, with some parts being shone into a bright golden hue after being climbed on for such a long time. No wonder it was chosen to be one of the locations for the amazing dance film slash film-length music video, Girl Walk // All Day (2011). In the film, the Girl (played/danced by Anne Marsen) wants the whole city to dance with her, and the statue crops up towards the end in a really uplifting scene.

The Alice in Wonderland statue can be seen in Chapter 11 and Chapter 12 of Girl Walk // All Day, but I would highly recommend watching the whole film from the beginning instead of just these two chapters. This is probably one of my favourite films of all time thanks to its use of one of my favourite albums combined with the sheer joy and communicative nature of dance. Highly recommended! (Both the film and visiting the statue.)