Frank Herbert’s Dune is one of the most famous and groundbreaking science fiction novels of all time, and has a tumultuous film history. The story is quite complex, with thousands of years of history and lore to communicate, and an expansive story to fit its sweeping, bleak landscape. David Lynch attempted to translate it into film in 1984, with disastrous results. However, there was another, earlier attempt to translate the book into film that never came to fruition. Jodorowsky’s Dune (2013, dir. Frank Pavich) tells the story of another failed adaptation – that of surrealist director Alejandro Jodorowsky, whose vision for the film was so grand that it unfortunately caused the project to fold.

This is one of the most interesting documentaries I’ve seen recently. As a huge fan of Alejandro Jodorowsky and his surreal visions, and a huge fan of the Dune novels (and a secret fan of Lynch’s silly adaptation), after watching this documentary the most accurate description for my feelings was a genuine sense of loss. Jodorowsky’s version of Dune is routinely described as “the greatest movie that was never made”, and although I would hesitate to use that phrase since nobody really knows what it would have turned out like, I can only imagine exactly how mindblowing his version would have been. Especially given his masterful work on The Holy Mountain (1973) and El Topo (1970). And to think that that kind of film was prevented from coming into being is kind of heartbreaking.

And what an awesome project it would have been – roughly 14 hours long, starring Orson Welles, Mick Jagger, David Carradine and Salvador Dalí, with set design by HR Giger and music by Pink Floyd. It just sounds too good to be true. Unfortunately, budgetary pressures forced the project to fold, as a large portion of the film’s budget was spent in pre-production. In Jodorowsky’s Dune we are shown some of the storyboards, set design, and character designs, and to say it would have been a colourful affair would be an extreme understatement. Jodorowsky’s stories of how he attracted these “spiritual warriors” are so entertaining, they sound almost too good to be true as well. But the stories are nothing compared to the man leading the film – Jodorowsky himself.

Alejandro Jodorowsky is a supremely interesting person. His presentation on camera is jovial and humorous, and whilst telling his story he is seriously charming and clearly has so much passion for his lost magnum opus. He makes a lot of jokes but there are also times where his frustration and sadness in the face of his lost vision is almost tangible. All in all, he is very watchable (and quotable) indeed, and you can absolutely see how he charmed so many people into believing in his outlandish project. 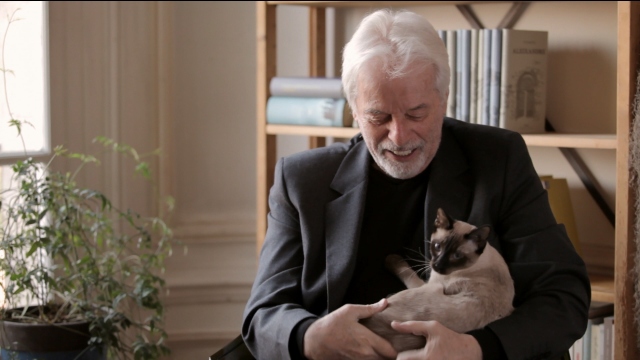 The documentary itself is constructed in the form of talking head interviews with Jodorowsky and the other key players of the film, intercut with footage of what the film might have looked like given the designs shown. Each individual has their own story to tell of Jodorowsky’s eccentric genius, and their own perspective on the film as it grew larger and larger. What is most interesting, however, is towards the end of the documentary, where we learn about the impact that this film has had on other science fiction films. Despite never being made, Jodorowsky’s interpretation of Dune has inspired other films, such as Alien (1979), the Star Wars films, and Prometheus (2012), to name but a few. It is entirely unique and fascinating that a film that never even existed fully formed has had such an impact on films, and on the visual development of the science fiction genre of film.

P.S. As a result of Jodorowsky’s Dune not being made, this is what we’re missing out on: