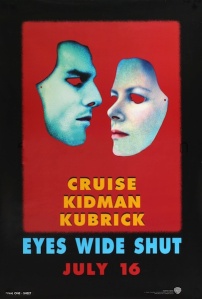 A New York City doctor, who is married to an art curator, pushes himself on a harrowing and dangerous night-long odyssey of sexual and moral discovery after his wife admits that she once almost cheated on him. (source)

For some reason, the other day I had the urge to watch this film. I don’t know if it was the weird conspiracy theory Wikipedia page I had been reading the day before, or whether I just felt like a bit of Kubrickian magic, but I watched it, and I didn’t hate it. I fully expected to think that this film would be super dumb and a waste of time, but it actually isn’t that bad. It is slightly self-indulgent, and almost intentionally thematically obtuse, and the pacing is quite slow at times, not to mention there is a strange fascination with having Nicole Kidman appear naked almost all the time. However, there are also many positive elements to this film.

Firstly, Kubrick’s direction is quite flawless, as usual. Every move the camera makes is artful in some way. Visually, Eyes Wide Shut is fantastic, and it’s not just the direction – the cinematography, set design, and costume design, are all equally amazing. The set design in particular is so intriguing in each scene, making use of its Christmas setting with lots of fairy lights and sparkling Christmas trees. It does seem like every person in the film owns the exact same Christmas tree, but it also can be seen as an interesting visual motif that becomes symbolic as the story progresses. 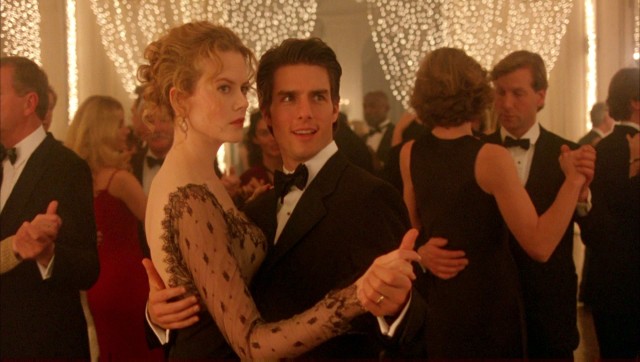 It’s easy to say a lot of bad things about Tom Cruise and Nicole Kidman (both collectively and individually, I suppose), but you cannot deny that undertaking this film as a couple was a really risky move. When you consider that they were basically one of the main “it couples” of the 90s, these roles seem like the opposite of the kind of couple like which they would have wanted to appear. Which is almost why the two leads succeed in their roles – it’s kind of awkward to think that the two are actually happily married in real life (at least, at the time), but simultaneously, it makes sense to have two people who already have a baseline level of intimacy with one another to play these kinds of complicated roles.

In terms of the acting, I’m generally not a fan of Tom Cruise (although I haven’t seen Magnolia (1999) yet and I’m told that’s his best film), and I sometimes find it difficult to separate his strange real life persona from his acting. I quite liked him in Eyes Wide Shut, though, particularly during the moments where he was required to show intense stress or upset. He has a really creepy way of communicating happiness, but other intense emotions are communicated well. Nicole Kidman is quite stunning in this film, particularly early in the film as her character wrestles with telling her husband about her potential infidelity, and further into the film as she grills her husband on his own feelings. 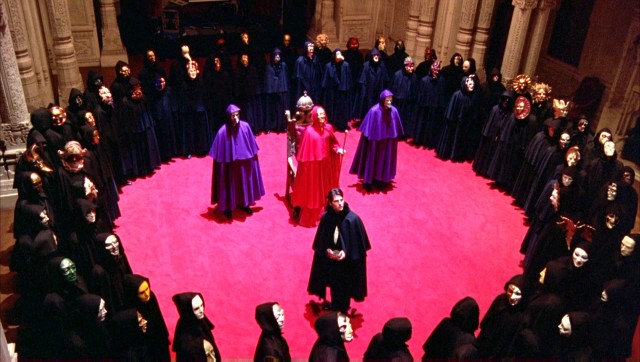 I found the cult-ish elements of the film really interesting from the beginning, and the way this part of the story is set up and addressed was quite thrilling. However, as per the film’s assigned genre of ‘erotic thriller’, some of the cult scenes are pretty full on in terms of their sexual content. At the same time, what else would you expect from a creepy cloak and mask party in a gigantic mansion? The whole cult scene feels like the creepiest hotel room parts of The Shining (1980), except extended to about fifteen minutes long per scene. It’s a strange experience but the aesthetics make it a very memorable one indeed. Additionally, the music all throughout this famous scene is so amazing and creepy, as opposed to the score throughout the rest of the film which is blatantly lazy.

I was surprised by how much I enjoyed watching Eyes Wide Shut, because all I’d really heard about it was how strange and pointless it was. It is a strange viewing experience, and in typical Kubrick style it does mess around with your mind a little bit, but that’s half the fun when watching a film from such a provocative director. Cruise and Kidman are also surprisingly good. But the main issue with this film is its plodding pace, and its self-indulgent attitude. Is Kubrick making a comment on crazy cults and outing himself as a member of the Illuminati, or is the film an allegory for sexuality in the modern marriage? Who knows. In my opinion, the visuals are more than enough of a reason to watch this strange and compelling film.