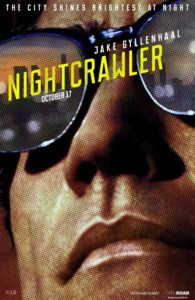 This review will be shorter than usual, because you need to see this film immediately. Nightcrawler (2014, dir. Dan Gilroy) is a creepy and atmospheric portrait of pathological obsession and questionable ethics. Jake Gyllenhaal plays Louis “Lou” Bloom, a young man who is looking for a job. When he stumbles upon the fast paced lifestyle of freelance cameramen who film late-night crime and accident scenes and sell them to news stations for a tidy sum, Louis sets out to become the very best. However, as his success grows, so too does his thirst for more brutal and gruesome scenes.

Jake Gyllenhaal is amazing in this film and it is an unquestionable truth that he was robbed of a Best Actor in a Leading Role nomination at this year’s Oscars. I’ve never seen him in a role like this before; the kind of role where you almost want to stop watching because you hate his character so much, but you can’t look away because you want to know what he does next. It amazes me how Gyllenhaal can turn his usually affable smile into something so sinister and awkwardly wrong, and portray a charming yet undeniably sociopathic individual with such congruence. I absolutely loved his performance. Gyllenhaal almost disappears into this distasteful monster character and it’s thrilling to see.

Gyllenhaal is counterbalanced by Rene Russo as morning news director Nina Romina, who was the perfect choice for this role because she has that quality of “I know who you are but I can never remember your name” – a feeling that’s so frustrating yet also compelling. Her cool and confident demeanour is the perfect contrast to the constant edginess of Louis Bloom. Further, Louis’ sidekick-slash-intern Rick Carey, played by Riz Ahmed, is also a good counterbalancing factor, adding comic relief in the form of dry humour that is so welcome after some extremely tense scenes.

One category that Nightcrawler was nominated for at this year’s Oscars was Best Original Screenplay, and I would absolutely agree with that nomination. The dialogue is so great, and Gyllenhaal and his co-stars all make the script their own. Gyllenhaal really does deserve some form of commendation for his performance because he turns some of the most unlikeable and horrible dialogue into a truly engaging film-watching experience. Creatively, Nightcrawler is also very watchable due to its atmospheric direction and cinematography. The way that this film handles light is beautiful to watch. Because most of the scenes are set at night, the film makes use of the types of light available during this time – torches, streetlamps, car lights, police lights, the outdoor lights of a house. Partner that with smoke rising from the ground and the smog of Los Angeles, and you have a noir-esque and creepy visual masterpiece.

I loved Nightcrawler so much and I think this is another incidence where I’ll be complaining about its snub for a long time. Jake Gyllenhaal defies expectation and crafts such a truly unlikeable yet totally engaging character, which makes this film unforgettable. There are some moments where I still feel slightly creeped out when just thinking about them, and the experience of seeing this at the cinema was totally worth it. The visuals plus the stellar sound design plus the amazing performances equals one absolutely worthy film that needs to be seen at the cinema.

Is it worth paying for a ticket?: Definitely.
Watch the trailer here.