Rosemary’s Baby (2014): Was this really necessary?

It’s not a secret that I have a little obsession with Roman Polanski’s Rosemary’s Baby (1968). I’ve written a review on it, plus a post on the visuals and cinematography, and Rosemary herself proudly appears at the top of my website. I even found two locations from the film when I visited New York City last year. Back when I first heard that a remake was on the cards, I was slightly confused because I could not anticipate any way that a new version could improve upon the original, nor what a remake could really have to offer. When I heard it would be a mini-series, I was completely put off and decided not to watch it. However, I very recently looked at the mini-series’ Wikipedia page, where I read that some critics praised it for its faithfulness to the original. My interest was piqued, and I made the decision to watch it. What a decision that was.

This new Rosemary’s Baby contains the same basic story structure as the original. Rosemary Woodhouse (Zoe Saldana) and her husband Guy Woodhouse (Patrick J. Adams) have moved to Paris so that Guy can pursue his academic career, and hopefully become an accomplished writer. When Rosemary’s bag is stolen on the street she is led to the mysterious Margaux (Carole Bouquet) and Roman Castevet (Jason Isaacs), who eventually invite Rosemary and Guy to live in their sumptuous and exclusive apartment building. Rosemary and Guy have experienced the grief of miscarriage, and soon decide to try for another child. Over time, the Castevets become more and more involved in their personal lives, with increasingly disturbing events occurring. 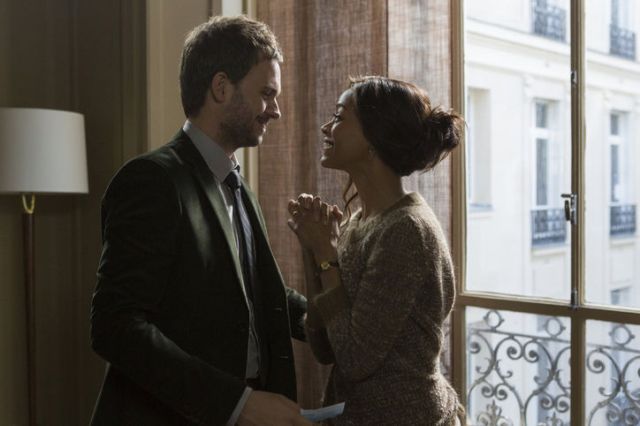 As a result of being based on the story of a solid film, which is based on the story of a very solid book, you would think that it would be difficult to get things wrong. It was like this mini-series had everything set up for it – creepy premise, intriguing story, lovely location, meddling Satanists, the works. However, sadly, watching this mini-series was like swimming through a pool filled with molasses. Slow, frustrating, kind of disgusting, and a huge waste of time.

The biggest difference between the original and the mini-series is that one is set in New York, and the other in Paris. It feels like the makers of this new version decided to ensure that there was enough of a departure from the original, and the shifting of location is a pretty obvious way of doing just so. But the setting of Paris is also a nice way of making the mini-series less samey, and additionally a good way of making sure that Rosemary truly is helpless and alone in 2014, a time where women like our protagonist are generally much more independent than the Rosemary of 1968. There are some beautiful shots of Paris, some lovely shots of architecture and streets; but it’s admittedly pretty difficult to make Paris look ugly. The direction by Agnieszka Holland is more or less good, but it doesn’t distract from the disappointment of the rest of the mini-series.

The second biggest difference is the level of gore – there are a lot of gory moments between the two episodes that this mini-series comprises, as opposed to the original film which in comparison is relatively bloodless. There are a number of disgusting, bloody moments that are focused on seemingly trying to gross out and horrify the viewer. The original film never had to rely on gory moments to keep the viewer horrified or on the edge of their seat. This silly mini-series succumbs to gore rather than working hard on managing a level of suspense that actually keeps the viewer interested. Sure, we can see someone eating a still beating heart or some duck innards, but if there isn’t a level of suspense to support this over time, it just feels like they’re trying too hard.

The third biggest difference is the real kicker, the reason why I was so frustrated with it in the first place. This mini-series assumes that everyone has seen the original film. And this mini-series is more than three hours long in total. What does one do when they have viewers they need to keep interested and a whole bunch more time to do it in? This mini-series decides to show its viewers the behind the scenes drama – Guy’s involvements with Roman and Margaux Castevet, the Satanic rituals, everything.

As a result, there’s nothing for the viewer to find out themselves. Whilst the original film could definitely be deemed a psychological thriller, this is just a game of show and tell. This is at the expense of the suspense that was so carefully built in the original film, where Rosemary is shown as paranoid and mentally ill, and has to prove to the audience that she’s right all along. In the mini-series, we know that Rosemary’s beliefs are correct, so there is absolutely no tension. We’re directly shown Rosemary seeing a Satanic ritual through a window, as opposed to Rosemary hearing strange chanting through a wall that could be anything, so there are no questions to be asked about anything. This is a huge shame. All the tension is dumbed down to the point where it becomes boring. There is no mystery, no suspense, no tension, and no artful handling of known information about the film. 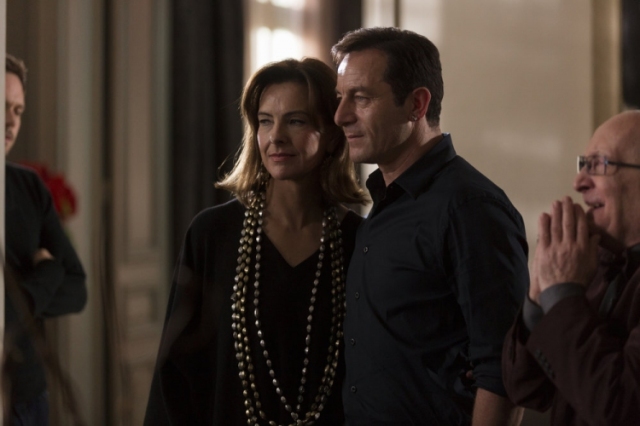 Performance-wise, though, Rosemary’s Baby isn’t so bad. Zoe Saldana does with the script what she can, and is a very believable kind of modern Rosemary. As aforementioned, the change of setting does serve the modern adaptation well, and Saldana’s performance is a good interpretation of a previously independent woman who is displaced and off balance. However, when it comes to the more intense moments of the story, Saldana’s performance tends to be similar to any old screaming female from a horror film. Patrick J. Adams is so forgettable as Guy Woodhouse and could have been swapped out for any good-looking actor. I loved watching Carole Bouquet’s and Jason Isaacs’ performances as Margaux and Roman Castevet though. Both actors had great chemistry together and did seem to sufficiently portray a modern type of Satanist; charming and influential, as opposed to the original film’s portrayal of the Satanists as repellent and underground.

I think what I hated most about this mini-series though was one moment where a certain character is experiencing a supposedly tense moment, and this music was playing in the background as non-diegetic sound. Really? Really.

Did this even need to be made? No. Does it improve upon the original? No. Was it an enjoyable viewing experience? Sort of, but not really. I very much enjoyed the fact that it was set in Paris, because the beautiful shots of the city and its architecture was a welcome distraction from the ridiculousness of the rest of it. To her credit, Zoe Saldana does a nice job with the role of Rosemary Woodhouse, retaining Mia Farrow’s innocent vibes and girlish demeanour, and her abject horror at what is happening to her body. But the changes made to the way the story is told were way too frustrating and had too much of a negative impact on the suspense, tension, and my overall interest in watching this. Ultimately, I wouldn’t recommend watching it because three or more hours is way too much of your precious time to waste on a bad remake. Stick to the original.