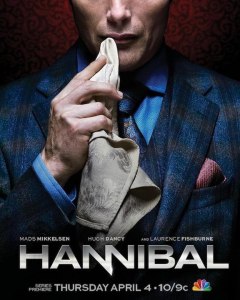 Yet again I’ve gotten stuck into a television series and I feel the need to post/rant about how much I love it. I’m sure you’ve all heard of NBC’s Hannibal before – the general story is based on the book Red Dragon by Thomas Harris, with the character of Hannibal himself being featured in the classic film The Silence of the Lambs (1991). The very name of Hannibal may cause you to recall the image of a psychotic serial killer in a mask, making strange hissing noises in a prison cell, and perhaps even eating the faces of a prison guard or two. But Hannibal is much more than that – an atmospheric, truly creepy piece of televised art that has captured my imagination and given me some seriously strange nightmares.

The television series takes an interesting spin on the novel and original film, with flawed genius criminal profiler Will Graham (Hugh Dancy) being the anti-hero protagonist, who investigates horrific murders and serial killings whilst confronting his own personal fears and flaws. The good doctor Hannibal Lecter is played by the one and only Mads Mikkelsen, whose performance is amazing and undoubtedly creepy. Laurence Fishburn rounds out this trio with his performance as Special Agent-in-Charge Jack Crawford, Will Graham’s boss. The first season’s storyline follows a specific set of serial killings which provide the structure and overall themes of the season, with numerous contained episodes where Will Graham must solve one-off killings.

I haven’t watched all of season two yet, so please no spoilers! I have a good understanding of the films and books so I can kind of guess where things are heading, but I’m loving the surprises in the show, and I definitely have a big crush on Mads Mikkelsen now.

Below are ten reasons why I love NBC’s Hannibal, in no particular order. 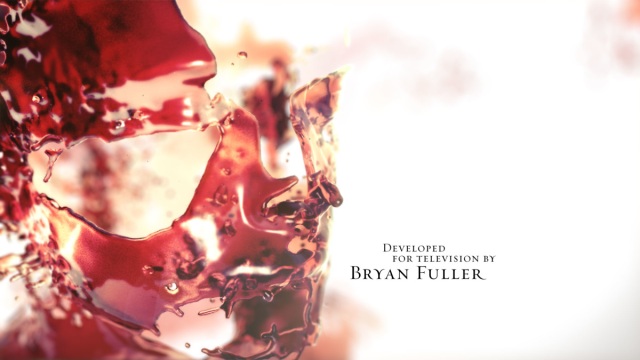 It’s funny because you would think that there would be a million options for this show’s opening title sequence. I’m sure that so many creative people thought about what they could do and how they could play on the gore of the show and the iconic cannibalistic tendencies of Dr Lecter. What they have achieved instead is perfect minimalism. Blood pours onto the screen forming human faces of the cast members, in what is a simple but very creepy communication of the tone of the show and its themes of blood, guts, and murder. The music adds to this creepiness. Sometimes the more simple an opening title sequence is, the more it allows the content and the essence of the show to shine through, and this is a perfect example of that.

Perfect casting. I’m loving the trend of casting film actors in edgy television dramas. Mads Mikkelsen gives such a chilling performance as Dr Hannibal Lecter, a psychiatrist with a hidden penchant for certain activities and gourmet cooking. Mads Mikkelsen is pretty much amazing in everything, but I’m loving his take on Hannibal; hiding in plain sight, someone who is known publicly but not fully known personally.

The image above of the deer-slash-raven is one of many beautiful and disturbing images that will haunt your imagination for a long time after watching an episode. Some of the murders are so creatively executed (no pun intended, additionally probably the weirdest sentence I’ve ever typed), such that they are simultaneously beautiful and completely repulsive. A certain face-chopping murder towards the end of season one was completely disturbing, and a certain grain silo location murder in season two is still blowing my mind in terms of its creativity and brutality. This is a strange paragraph, I promise I’m not a serial killer. 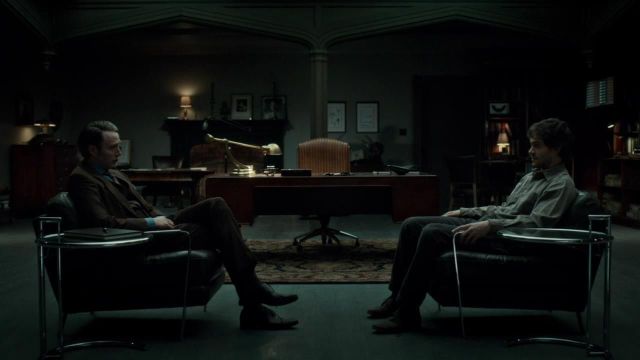 I love that during each episode we get an insight into the minds of seriously strange and disturbed people. I find things like this fascinating. The fact that our protagonist, Will Graham, is gifted with the mysterious ability to fully empathise with the killers he is trying to track down, is a very convenient way of not only telling a story, but creating a tense atmosphere through providing an insight into the depraved mind of a killer. Because two main characters are psychiatrists, we’re also given an insight into the way that mental health professionals analyse these cases, which I also find fascinating.

These amazing suits fit with what I said above in terms of Hannibal hiding in plain sight. Hannibal is a creepy dude who partakes in some strange shenanigans behind closed doors. But his wardrobe insinuates someone who is bold and confident – just look at that huge tie and pocket square. Maybe Hannibal is trying to distract people from his true character, but for me, it also looks as if he’s showing off that his deeds are going unpunished. As a side note, the costume design for all of the characters is amazing, which reminds me of Mad Men in some ways. It’s clear that so much thought is put into the symbolism of each outfit, which makes the show continuously visually compelling.

6. Storytelling and the art of the filler episode

I might be a rare television watcher in that I don’t mind a filler episode every now and then – an episode of a series where its storyline doesn’t necessarily contribute to the central story arc of the overall show. There are a number of great filler episodes in Hannibal, but my favourite so far has been this one starring Molly Shannon, called ‘Œuf’. I’m not sure if the episode was broadcast in the US but it was a cracker, and absolutely brutal. The storytelling is also generally flawless.

Once I notice a certain visual motif, I can’t forget it. One visual motif used a lot in Hannibal is that of mirrors and balance. A mirrored or symmetrical looking scene often shows a balance of power, or a meeting of the minds, as we see above during one of Hannibal’s therapy sessions. Mirroring is used in a therapeutic capacity with clients to build rapport and to assist the client to feel understood, and I think it’s great that this theoretical tidbit has been extended out to the visuals of the show. Maybe this is also another symbol for Hannibal hiding behind a neatly groomed exterior, with a conscious mimicking of his clients to fool them into trusting him.

I initially didn’t like this little gang of forensic investigators but over time I’ve really grown to love the sidekick characters who work at the FBI. At the beginning I thought that Hettienne Park’s character was going to be a secret villain because of the shade she was throwing on Will Graham, but I was completely wrong. I’ve grown to love this wisecracking trio because whilst they make cute jokes when they’re working on gruesome murders, the three also have a surprisingly good amount of depth and characterisation. Bonus points also go to Gillian Anderson’s sidekick character of Hannibal’s own psychotherapist, Dr. Bedelia Du Maurier. Love her.

Surprise! I’ve mentioned approximately twenty times in each of the points above that the visuals are amazing in this show, so I feel the need to restate it – Hannibal is a work of cinematographic art, the direction is flawless and the production design is perfect. Visually, as aforementioned, Hannibal is beautiful yet brutal, and every episode I seem to find something new to love.

This is one of those shows where once you finish an episode, you have to watch the next one straight away. You would think that after all the murdering and psychoanalysis I would need a bit of a rest, but no dice. With that in mind, I’m off to watch the next episode.

Have you seen Hannibal yet? If so, what do you think? No spoilers though!