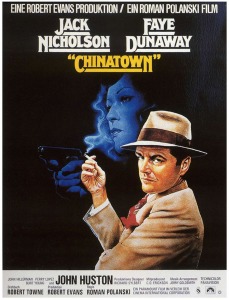 Here’s another of my Blindspot films – films which I have identified as a blind spot in my watch list, films that I probably should have seen already but have finally committed to actually watching in 2015. I recently watched Roman Polanski’s Chinatown (1974), a neo-noir mystery film starring Jack Nicholson and Faye Dunaway. Its synopsis is as follows:

JJ ‘Jake’ Gittes is a private detective who seems to specialize in matrimonial cases. He is hired by Evelyn Mulwray when she suspects her husband Hollis, builder of the city’s water supply system, of having an affair. Gittes does what he does best and photographs him with a young girl but in the ensuing scandal, it seems he was hired by an impersonator and not the real Mrs. Mulwray. When Mr. Mulwray is found dead, Jake is plunged into a complex web of deceit involving murder, incest and municipal corruption all related to the city’s water supply. (source)

What happens when you watch a film so good that you literally feel unable to write about it? Generally I write one of my ‘Thoughts On Film‘ posts instead of a full review because my brain is too overloaded with awesomeness to formulate coherent thoughts. Here are some of my thoughts on this excellent film. Forget it, Anna of Film Grimoire, it’s Chinatown.