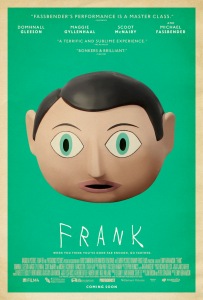 A quirky comedy-drama about music, authenticity and nonsense, Frank (2014, dir. Lenny Abrahamson) tells the story of the best band in the universe that no one has heard of yet – Soronprfbs. Jon Burroughs (Domnhall Gleeson) is a man in search of a band, a man who has a lot to say musically but no outlets in which he is capable of saying it. By chance, he ends up playing keyboards for Soronprfbs, and meeting the enigmatic Frank (Michael Fassbender), who he is strangely intrigued by. What follows is an exploration of craziness as one band attempts to write an album that people might actually like, and become the best music-makers of all time.

It always amazes me how certain actors have the ability to completely out-act their physical environment. We’ve seen it with John Hurt in David Lynch’s The Elephant Man (1980), one of my favourite movies of all time, in which Hurt plays John Merrick, the titular man with elephant-like physical deformities. In The Elephant Man, Hurt shines through his facial and body prosthetics to give one of the best performances of his career, one that I could never forget. It’s the same for Frank. Michael Fassbender wears this round papier-mache mask over his head for 95% of the film, with a strangely gormless expression on its face that doesn’t really show any kind of emotion. But throughout the film, Frank’s joy and pain and everything else in between is so infectious that it feels as if the mask takes on different expressions and different feelings. It requires a really special actor to be able to do this, to communicate emotion when their face is covered with one of the weirdest masks imaginable. If there was a specific Academy Award for people who gave amazing performances whilst wearing a giant mask, I would want Fassbender to win hands down. 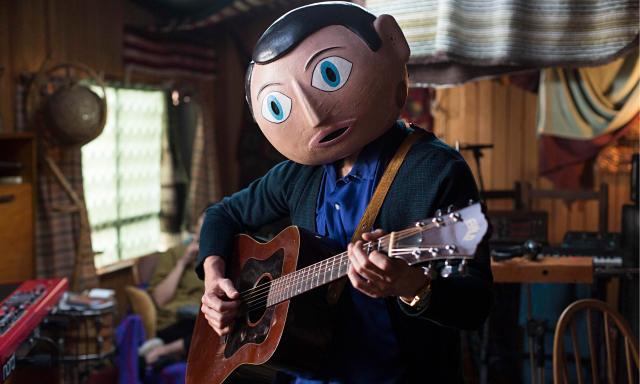 It’s not all about Frank though, with Domnhall Gleeson giving an awkward and hilarious performance as desperate wannabe musician Jon Burroughs. He provides some narration through voiceovers and Twitter and Tumblr updates that are creatively integrated into the story, and there’s something about his desperate-sounding voice and sarcasm that is just funny. Maggie Gyllenhaal is also a highlight as Frank’s fellow band member with anger issues and and extreme passion for the theremin. I’d forgotten that Maggie Gyllenhaal was a master of deadpan humour, and she puts it to good use here.

Creatively, the film is stunning with some great direction by Lenny Abhramson, particularly during the moments that show off the music-making process. I loved the frenetic energy during the scenes where the band are holed away in their countryside paradise, making music together and attempting to record weird sounds to include in their songs. Visually, the film is quirky and weird, which matches the subject matter very well indeed. There are bright colours and lighting throughout and it seems as if the film’s visual tone intends to match its strange hero. But there’s also a tenderness to this film, particularly towards the end, that will take you by surprise. This may be a film about a man who wears a giant mask for some reason, but it’s also warm and emotional. By the end, you will have grown fond of Frank’s strange expression and antics, to the point where you want to see more, to learn more about his life, and to make sure that the amazing Soronprfbs reach the astounding heights that they so deserve.

Above all, Frank is an imaginative and unique film that explores authenticity and creativity – Frank is wearing a mask, but he isn’t trying to be someone else by putting it on, he’s showing the world his fully realised self. Although the film has quite a heavy and borderline depressing third act, overall Frank is one of those films where you’ll remember certain moments and smile. As aforementioned, it is surprisingly emotional, and its silly moments are counterbalanced by a tenderness that is infectious. Not to mention, for lovers of progressive rock and experimental music, the soundtrack is another highlight. Frank is indeed a strange journey, and that’s no surprise. But it’s a journey that will take you on a rollercoaster of emotions, and that’s exactly what Frank’s music intends to do.