I’m aware that this is probably the most delayed “Is it worth paying for a ticket?” review I’ve done. But for some reason, Australia seemed to get Big Eyes (2014, dir. Tim Burton) lucky last. In any case, Big Eyes tells the story of artist Margaret Keane (Amy Adams), a woman who paints haunting images of children with giant, somewhat melancholy, alien-like eyes. Margaret is a newly single mother seeking to find a place for herself in the art world of San Francisco, and when she meets her future husband, fellow artist Walter Keane (Christoph Waltz), she feels she has hit the jackpot. However, after Walter claims credit for her works and begins to be the main face and salesman for them, their relationship becomes tenuous and Margaret must fight to retain her own artistic integrity, particularly as her work becomes hugely successful.

First and foremost, for a film directed by Tim Burton, Big Eyes sure doesn’t feel like a film directed by Tim Burton. Johnny Depp doesn’t make even one appearance. But seriously, apart from two brief moments in a supermarket and whilst Margaret is painting, there is little to no evidence of the surrealism that the director is well known for. The film does however retain his love of disturbing and cartoonish characters, with Christoph Waltz’s performance as Walter Keane becoming more and more cartoonishly villainous as the film progresses. I don’t think a non-Burton-ish Tim Burton film is a sign of a bad Tim Burton film, either. The direction looked to be fairly standard for this type of dramatic film, with no real chances taken, but it was solid. Big Eyes is a step away from his preferred aesthetic and its story development is solid and straightforward rather than predictably quirky. 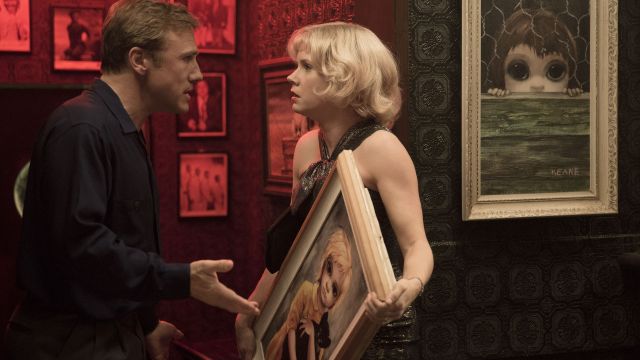 Amy Adams is quite charming as the meek and quiet Margaret Keane. This type of character isn’t often shown as the hero of a film; rather, often the Margarets of the world are shown as bookish sidekicks. Some may think that she’s not spunky enough to lead the show, but in my view, Margaret is a complex character whose development over time is entirely believable. Amy Adams plays quiet and shy well, but she also interprets shy-but-developing-strength very well. Her performance is subtle and clever. Conversely, as aforementioned, Christoph Waltz comes off as a cartoon villain, and the only thing missing is the moustache twirling. I love Waltz but this is not his best film.

Tim Burton’s bromance with Johnny Depp is well known, but so is his love affair with Danny Elfman, who has scored approximately 15 of his films (unless I’ve counted incorrectly). What I loved about Elfman’s score for Big Eyes was the fact that, again, it didn’t feel like a typical Tim Burton film score. Gone were the jaunty melodies that I might associate with everything else Burton has made, and instead the music is reflective and quiet like the film’s main character. Lana Del Rey’s song ‘Big Eyes’ is also featured to great effect. It’s quite a beautiful song and speaks well to the general themes of the film.

My only real criticism of Big Eyes, apart from Waltz’s silly performance (even though that was still entertaining), is that although the film ended in the right place, it tended to drag towards the end. The film is only 105 minutes long, but the denouement where Margaret and Walter’s conflicts are working towards becoming resolved was a tough stretch to get through. As Margaret seeks to take ownership of that which was hers all along, she engages Walter in a lengthy court battle. Sometimes I feel that ending films with a court case to resolve a story is sort of lazy. No spoilers here, but when a film ends with a court case, we kind of know how it’s probably going to end. Further, by the end of the film, when the interesting artistic story had all but finished and we were treated to a courtroom drama, all I felt was tired and ready to go home.

Overall though, I enjoyed Big Eyes. It was a totally different kind of Tim Burton film with good performances and an interesting story. I love watching films about artists and the creative process, and this film had an additionally interesting exploration of what it means to be a faker in the art world and the paranoia of having to cover your tracks. However, is this worth seeing in the cinema? Not necessarily. It’s a good film, but there’s nothing particularly special about seeing it on the big screen. I’m not sure there would be anything lost if you decided to watch it at home or on the computer. It’s an enjoyable film, but not necessarily worth seeing at the cinema.

Is it worth paying for a ticket?: Not really, but it’s not a bad film.
Watch the trailer here.