What a month! May was another month where it was a bit quiet over here at the old Film Grimoire. Work has been quite crazy and my assignments for my Master’s have all been due at the same time, so I’ve been doing quite a bit of lurking. But I certainly have been enjoying the posts I’ve been lurking on. So here is a selection of my favourites from this month, and I hope you enjoy them as well!

Craig of Craig’s Movie Report posted a lovely write-up this month of his favourite scenes that make the movie; defined as the little moments in a film that stick out and make the film memorable. I loved this post because it’s so interesting to see which little moments stick out for different people in certain films!

Sometimes you can make art out of the strangest things. Like this post at Moss & Fog, where some Spanish architects made some beautiful light boxes out of melted Haribo gummi bears. The video is strangely hypnotic, definitely worth a watch.

Amazing blog Mettel Ray has just turned five years old! This post on five little things that keep the blog (and Getter) running was a nice read. It’s always interesting to read insights on blogging from lots of different people. My list would read like this: 1. coffee, 2. coffee, 3 – 5. coffee.

I participated in the excellent Decades Blogathon this month, hosted by Three Rows Back and Digital Shortbread. I wrote about Deep Red (1975), but there were some other amazing posts that you should read – for example, Eric of Isaacs Picture Conclusions‘ posts on Jaws (1975), Cindy Bruchman‘s post on Barry Lyndon (1975), and Drew of Drew Reviews Movies‘ post on Tommy Boy (1995).

I loved this post by Courtney at Cinema Axis, which poses the very important question – are we killing the element of surprise in cinema? Seriously, there is just too much content in trailers these days, plus social media campaigns that reveal everything before we even get the chance to be surprised. I’ll never forget the feeling of being surprised and delighted by seeing certain characters in the Harry Potter films for the first time, without the social media barrage. Sad to think that a time like that is lost. What do you guys think?

The lovely Alina of Literary Vittles proves again that New Zealand is a gorgeous place with her recent photos and travel stories from Mount Maunganui. So many cute sheep, I cannot handle it!

Spring Breakers (2013) was a pretty divisive film. I really enjoyed it though. Alex of And So It Begins… identified his top 46 things he loves about the film this month. There are so many great moments here, and little insights into sound and production design.

I still haven’t seen Mad Max: Fury Road (2015) and it’s actually killing me. I have been reading everyone’s amazing reviews writing all about the production design, pacing and direction and it gives me serious FOMO. When I read Eric of Isaacs Picture Conclusions‘ write-up on the film, which describes the film as “balls out awesome” I knew I had missed out on something supremely awesome. Fingers crossed I get to see it soon!

Here’s a selection of my favourite Game of Thrones posts, because Thrones season is the best season. 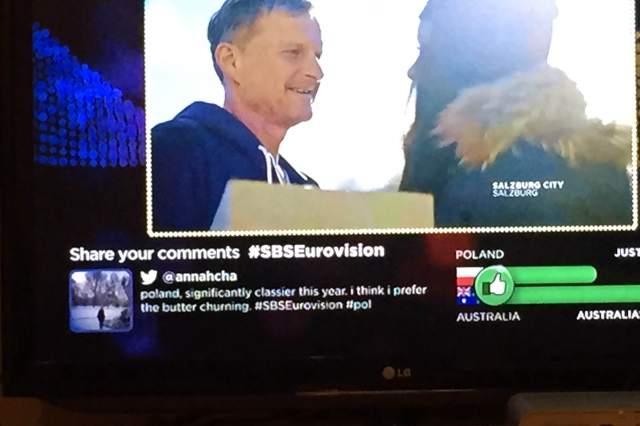 And, behold – the above image is probably my favourite thing this month. My favourite cross-continental extravganza Eurovision was this month and I’m still sad it’s finished. But one of my silly tweets was broadcast on national television! Which has been my dream since they started airing those tweets on television.

What were your favourite posts and random things this month?