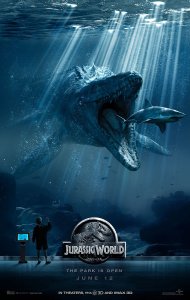 Probably one of my more anticipated films of 2015, Jurassic World (2015, dir. Colin Trevorrow) is the fourth in a series of dinosaur adventures that began with Jurassic Park, directed by Steven Spielberg back in 1993. The plot is as follows:

22 years after the original Jurassic Park failed, the new park (also known as Jurassic World) is open for business. After years of studying genetics the scientists on the park genetically engineer a new breed of dinosaur. When everything goes horribly wrong, will our heroes make it off the island? (source)

I originally intended to write an “Is it worth paying for a ticket?” review on Jurassic World, but for a million reasons I kept getting distracted and writing about other things. Now I’m not even sure if it’s still in cinemas. Hence, here is a selection of thoughts that I had during my viewing of the film.