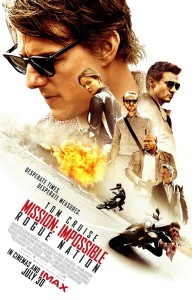 Ethan and team take on their most impossible mission yet, eradicating the Syndicate – an International rogue organization as highly skilled as they are, committed to destroying the IMF. (source)

This is going to be a really quick review. Straight up: I wasn’t a fan of this. If I’m being honest, Tom Cruise as Ethan Hunt this time around appears flat, lifeless and uncharismatic. His stunts are great and the fact that he’s able to pull them off is quite impressive, but half the stunts just feel like an opportunity for Cruise to feel blood running through his veins again. The funny jokes between Simon Pegg and Jeremy Renner were completely ruined because I now really dislike Jeremy Renner as a result of this video. Quite easily the best thing about this film is Rebecca Ferguson as femme fatale Ilsa Faust, a double-crosser with a hidden agenda. She physically looks like a young Katherine Hepburn which occasionally blew my mind, and it’s great to see a super strong woman in the franchise who doesn’t devolve into a sideline love interest. It’s just a bit of a shame that she and Cruise don’t have much charisma together, either. 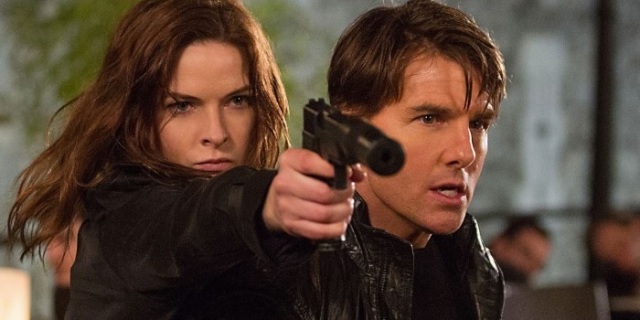 I have no idea what to say about the story because I found it quite confusing to follow. It may have been too much for my tiny brain to watch after a long day at work. It felt plot-holey with too many deus ex machina saves at the last minute, which threw out my engagement with the story. I suppose my very favourite thing about the film, aside from Rebecca Ferguson, was the direction by Christopher McQuarrie. There’s one particular underwater sequence that is shot in an impeccable manner, building tension in such a way that you feel like you’re holding your breath along with the submerged characters. The cinematography by Robert Elswit was another highlight. Elswit was the cinematographer for Nightcrawler (2014) and the two feel similar somehow, with a lot of energy buzzing in each shot.

By the end of Mission: Impossible – Rogue Nation, I was literally falling asleep. I have no idea how this film ends and I can’t recall the final 20 minutes. I hope it all worked out alright for everyone involved. I could easily blame this on the fact that I had a long day at work before watching the film in the cinema, but at the same time, if this film had been effective at hooking me in then it wouldn’t have caused me to fall asleep in the first place. There’s something truly pitiful about an action film that sends you to sleep. If anything, I suppose I’m glad we chose to see this at the cinema instead of Fantastic Four (2015).

Is it worth paying for a ticket?: Not really.
Watch the trailer here.