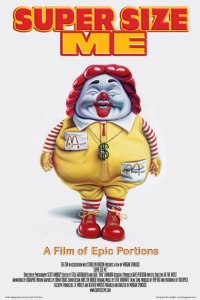 I recently re-watched Super Size Me (2004, dir. Morgan Spurlock), a documentary film about our troubled relationship with a certain red and yellow fast food restaurant chain, and one man’s quest to push his body to the limit of its saturated fat intake. A synopsis:

While examining the influence of the fast food industry, Morgan Spurlock personally explores the consequences on his health of a diet of solely McDonald’s food for one month. (source)

Here are some of my thoughts on Super Size Me.