I chose to place Jacob’s Ladder (1990, dir. Adrian Lyne) on my Blindspot Series list as I’d always heard people saying things to the effect of, “This film is a ripoff of Jacob’s Ladder“, or “That ending was pretty similar to Jacob’s Ladder except…”, et cetera. Having never seen the film, I always felt in the dark about that comparison. I decided to pop this one on the list to see what exactly Jacob’s Ladder is all about, and to perhaps be able to compare it to other films in future like everyone else seems to do. It goes without saying that this one has a pretty interesting twist ending, which I won’t spoil for you if you haven’t seen it yet!

Jacob’s Ladder is a psychological thriller with horror elements, but thankfully little to no jump scares. It tells the story of Jacob Singer (Tim Robbins), who has returned from his time serving in the Vietnam War and works as a postman. Over time, and whilst mourning the death of his son, Jacob begins to see horrific visions that are strangely integrated into his daily life. Each of these visions appear symbolic to him, and he sets out to discover why they are happening.

I was expecting Jacob’s Ladder to be a lot scarier than it really is. However, this is much better than merely being scary – it’s deeply disturbing and affecting. Setting aside the actual plot of the film, it’s easy to make comparisons between Jacob’s war experience and his hallucinations, and the post-traumatic stress experience of soldiers who return from war. Initially viewing the film through that lens, before knowing how the film ends and certain plot details, gives the film a whole different layer to consider; which is impressive, considering that there are probably a million ways to interpret this film. Jacob’s Ladder confronts ideas of hell and heaven, conspiracies regarding government and war, and the ways that different people compartmentalise trauma. I would say that it’s definitely worth rewatching if you’ve only seen it once, and I look forward to doing so, now that I know how it all ends. 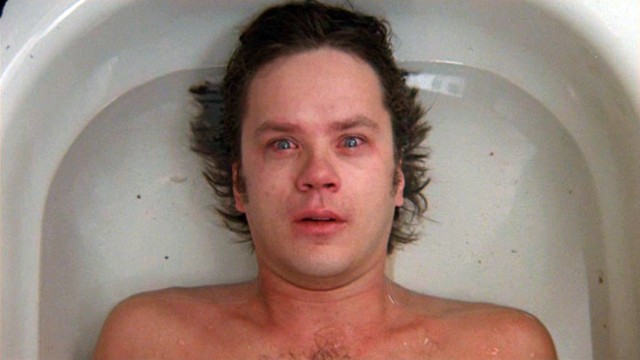 I don’t know much about Tim Robbins other than The Shawshank Redemption (1994) and Mystic River (2003), but he is amazing in this. Which sounds about right, since he is equally amazing in Shawshank and Mystic River. There are regular moments in this film where Jacob wakes up from dreams where he sees his deceased son alive and well, and the way that Robbins plays these is so heartbreaking. The way that Robbins is able to so fluidly move between the disturbing aspects of the film (for example, being confronted by a sinister administration clerk with horns), and the deeply emotionally affecting moments, is kind of stunning. As previously mentioned, I expected Jacob’s Ladder to be a straight-up horror film, so to have these moments with such emotional clarity was really surprising. I was also surprised to see George Costanza, I mean, Jason Alexander, and Macaulay Culkin in this film as well. Tim Robbins is the star of the whole thing, however, in providing the leadership for the whole tone of the film.

Creatively Jacob’s Ladder is also quite amazing. If you do any kind of Google image search for this, you’ll see some screenshots of some truly creepy practical effects, which is probably what the film is best known for. Sometimes practical effects and prosthetics in films from the 90s can look so cheesy and fake, but in this they are sparingly enough that their shock value remains fresh throughout. The direction by Adrian Lyne is such that the camera feels as if it’s constantly moving, making sure that just like Jacob, the viewers are also on unsteady feet, unsure of where the film will take you next. One scene at a party is the perfect example of this kind of direction plus the use of practical effects working together to create a truly unsettling atmosphere – cutting away from two dancers where one appears to not be entirely human, giving the viewer brief flashes of something horrific but allowing our imagination to do its worst.

A multilayered and disturbing film, Jacob’s Ladder will make you sit and think about life for about ten minutes after the credits start rolling. This is a film that isn’t referred to in popular culture much, but crops up now and again, particularly in reference to a particular type of twist ending; which, it has to be said, I wasn’t able to pick from the beginning. Tim Robbins is great in this, with his emotion expression a particular highlight. Jacob’s Ladder is a good example of a film where all aspects of its production seem to just work. Direction, acting, creepiness, storytelling – the whole thing is quite excellent.