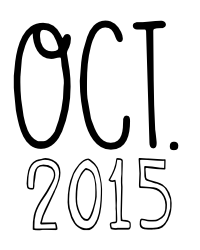 I think October was a pretty excellent month. I travelled overseas to visit the bustling metropolis of London for two weeks and found some fun film locations there, not to mention had many other good times as well. I’m back to normal life and work now, but the memories made during my trip will stick with me for a long time. Anyway, since I was away for two weeks, there was a two week gap in October where I could hardly read any posts due to inconvenient technology issues. So this post may be shorter than usual, but I have collected a number of my favourite things from this month to share with you all, and I hope you enjoy.

Travelling to London was firstly a great opportunity to catch up with two Londoners whose blogs I have been following for a long time – Abbi of abbiosbiston.com, and Alex of Alex Raphael! After our catch up I was lucky enough for Alex to dedicate one of his quizzes to one of our many topics of conversation, film archaeologists! It’s a funny and surreal experience meeting fellow bloggers in real life, especially those whom you’ve read for ages, but also so wonderful to catch up and find that they’re just as lovely in real life as they are online. Truly a highlight of my trip!

Moving along, I work with children (and their caregivers/families) for a living, so I know that kids have the infinite capacity to be scary when they want to be. Over at Filmnerdblog, Laura has collected a list of super scary kids in film right in time for the scariest month of the year. Such a great themed list just in time for Halloween. It would be fun to do some kind of movie marathon with these films.

Back in my August favourites post, I congratulated Brian and Brad of Hard Ticket to Home Video on their magnificent Shitfest win for their controversial review of It Follows (2014). This month (or, technically at the very end of September, but I read it in October, oops), they let us know about life post-Shitfest-win, and the many and varying ways in which the Shitfest trophy itself is potentially trying to murder them.

I love Cinematic Corner, and one of Sati’s post series which I love the most is her Visual Parallels series. Recently Sati published this beautiful post comparing the visual commonalities between The Hours (2002) and A Single Man (2009). Both films are absolutely gorgeous and contain similar themes, which naturally lends to similar visuals. It sounds simple but when you place the images together, it’s strangely striking. Really nice work. I also just found this post of hers comparing the visuals of Game of Thrones and Rome and now it’s one of my favourites as well!

One of my most favourite things in the world is laughing at predictions of the future-present from past generations. Maybe that sentence doesn’t make much sense, but maybe it will make more sense after you check out this post at excellent design blog Moss & Fog, which features a whole bunch of illustrations of what French people in 1899 thought French life would be like in the year 2000. Some of the ideas make sense (such as ‘correspondence cinema’), but some are nuts (such as ‘whale bus’), and I love it.

Meanwhile, Assholes Watching Movies (none of whom are actually assholes) have been knocking it out of the park with horror-themed posts for the spooky month of October. Two favourites of mine were: 1) this post on how to survive watching horror films if you’re a total chickenshit, as all the tips are very helpful indeed; and 2) this post including an interview with horror makeup artist Ashley Robinson, where the authors were given horrendous (but fake) injuries. Scary stuff!

Mark of Marked Movies posted a series of very interesting videos this month – the ‘Touch of Evil’ series by the New York Times. This series is quite special as it features short videos with hugely talented actors embodying some truly scary characters. It’s so interesting to see how each of the actors interprets each character. I particularly love Rooney Mara’s video where she takes on Alex from A Clockwork Orange (1971). And Jessica Chastain’s video is amazing. Also, Gary Oldman’s video proves that he can act the shiz out of literally anything. Actually I love all of them.

So as aforementioned, I’ve just returned from a lovely holiday, and it just so happens that earlier in the month, Emma of emmakwall (knows it all) also had a lovely holiday and visited the amazing city of Amsterdam. Emma posted some photos and stories of her adventures for us to enjoy, which I love as I’ve always wanted to visit there! I love travel posts and learning about where everyone’s been.

This month Michael of White City Cinema conducted an interview with legendary French New Wave filmmaker Agnes Varda for Time Out Chicago, which is amazing for the following reasons – firstly, the fact that he scored an interview with one of the most legendary voices of the Rive Gauche movement, and secondly, because the interview is as interesting and inspiring as the woman herself. 100% worth a read.

Lastly, Eric of Isaacs Picture Conclusions posted a wordless review of a film called Cooties (2015), which includes a picture of a plate of chicken nuggets. I haven’t seen the film so I don’t know if there’s any context for that, but for some reason this strikes me as the most amazing thing ever. If you’re after some words from Eric then don’t look past this post where he discusses eleven movies he watched during the summertime, films which appear to range in quality, but all align with Eric’s signature classy taste in films!