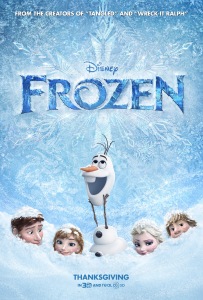 A juggernaut of children’s cinema now embedded in our pop culture landscape forevermore, Frozen (2013) entered the public consciousness with a very loud bang. Telling the story of two royal young women with different paths in life, its synopsis is as follows:

When the newly crowned Queen Elsa accidentally uses her power to turn things into ice to curse her home in infinite winter, her sister, Anna, teams up with a mountain man, his playful reindeer, and a snowman to change the weather condition. (source)

Here are some of my thoughts on Frozen.