The Criterion Blogathon: The Testament of Orpheus (1960) 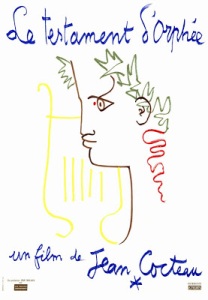 The finale of famed writer Jean Cocteau’s Orphic Trilogy, and directed by and starring the writer himself, The Testament of Orpheus (1960) is a beautifully constructed work of surrealist and symbolic art that ruminates on creativity, film, fame, and the nature of reality. The synopsis of the trilogy is as follows:

Realizing he is not long for this world, an aging 18th century poet travels through time in search of divine wisdom. In a mysterious, possibly post-apocalyptic wasteland, he has a series of enigmatic and surreal encounters with symbolic phantoms with whom he muses about the nature of art and his own career. Ultimately, the poet strives to achieve his own rebirth as an immortal celestial being. (source)

The first thing I’ll say about this strange and wonderful film (and trilogy as a whole), is that if you don’t have a healthy sense and appreciation of the utterly surreal, then it may not be for you; in fact, it may be an extremely frustrating experience. Cocteau’s The Testament of Orpheus is undoubtedly a work of art in its deep analysis of one creative mind, but it can be extremely obtuse, to the point of pretentiousness at times. At times the acting and performance of the unsurprisingly weird script can appear affected and stiff, and occasionally the combination of the two – the fluid and intense exploration of creativity and the inflexible and motionless acting styles – can be strange to watch. The film also feels self-indulgent at the same time as being a celebration of the self (that being Jean Cocteau’s self). Sometimes it’s all a bit much to take in. 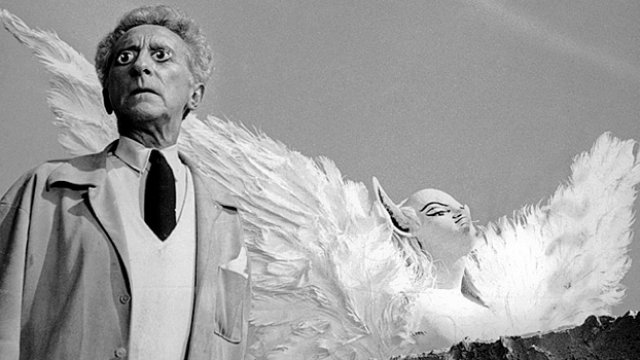 It’s true that the “storyline” is largely beyond comprehension; but this is half the fun of the trilogy as a whole. Cocteau makes a lot of good points about the nature of art and creativity as it pertains to film, at one point stating that “a painter always paints his own portrait”. He infers that a work of art always reflects the self of the artist, and in that manner, I find these films fascinating. To look at these films, and particularly this final film of the trilogy, as indicative of Cocteau’s state of mind is an interesting film-watching experience indeed. The film is peppered with Cocteau’s singular insights into his approach to poetry and film, particularly at the very beginning and the end. I won’t spoil it for you, but the ending monologue and clarification regarding the stars of the film is absurd to the point where you wonder if that’s the real ending, or whether it’s all an elaborate prank.

Shot in black and white apart from the odd flash of colour towards the end, the film is visually gorgeous, with shadows and light creating sumptuous textures throughout the set pieces of each scene. The costume design is generally so strange and interesting, particularly when it comes to the “man-horse” and during the more surreal moments of the film. The score is genuinely beautiful with select classical music pieces that feel very carefully chosen indeed. What I loved the most about this film were the camera tricks, particularly Cocteau’s apparent love of reversing film footage to create a strange and magical atmosphere. Watching this film is an engrossing aesthetic experience. Cocteau knows how to manipulate the visuals (and music) of his work, such that the result is something you find difficult to take your eyes away from, even despite the dangerous pretension and occasionally stilted acting.

Ultimately, I really enjoyed The Testament of Orpheus. I would provide a word of caution to those considering watching this without watching the previous films in the Orphic Trilogy – if you miss out on the first two films, some parts won’t make a lot of sense and will result in the film being slightly nonsensical, more so than it is already. The Testament of Orpheus is imbued with the bleak sense of humour and strange wit of Jean Cocteau, whose point of view is so interesting. Cocteau’s mind itself is truly fascinating, with surreal moments such as “intellectuals in love” and “the instant celebrity machine” standing out as absurd and genius. It is no wonder that The Testament of Orpheus sits very safely within the ranks of the highly acclaimed Criterion Collection films – it is unashamedly individual, and certainly is one to watch.