What We Do In The Shadows (2014): “I think we drink virgin blood because it sounds cool.” 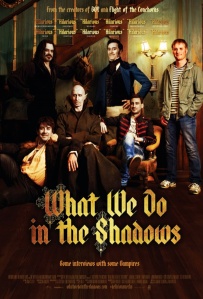 A mockumentary with clasically deadpan New Zealander humour plus vampires? I’m in. What We Do In The Shadows (2014, dir. Jemaine Clement and Taika Waititi) is, believe it or not, a mockumentary about vampires set in New Zealand. Viago (Taika Waititi), Vladislav (Jemaine Clement), Deacon (Jonny Brugh), and Petyr (Ben Fransham) are four vampires of varying ages into the hundreds and thousands of years, who all live together in a flat-sharing arrangement in Wellington. Whilst being filmed in the lead-up to an exciting undead event called the Unholy Masquerade, documentary cameras follow the foursome as they struggle with the mundane nature of modern life, and as they meet new human friends.

You may recognise the name Jemaine Clement from a little old television show slash New Zealand’s fourth most popular comedy rock band Flight of the Conchords. Clement has also been involved with such films as Eagle vs Shark (2007) and his latest release, People Places Things (2015). I always knew Jemaine Clement was a humorous beast, but in combination with his friend Taika Waititi, the two seem to become some kind of humour power-duo. What We Do In The Shadows bubbles with one of my favourite kinds of humour – deadpan, quaint New Zealand humour. There are no big belly-laughing, haw-haw humour jokes here – but subtly hilarious ones regarding human (and inhuman) relationship dynamics and reflections on modern versus ancient life. The humour is innocent and sharp, and I love it. The dialogue is so funny and natural, and does feel like a documentary where the subjects are very aware of being filmed.

If you’re a fan of vampire lore, prepare for this film to turn the mythology of the vampire on its head. Vampires are known to be generally elegant and brutal creatures, but these ones are flatmates in New Zealand who argue over who does the dishes or who sweeps up the spinal columns after a feast. We watch as the vampires draw pictures of one another because they can’t tell how their outfits look in the mirror, and as they genuinely regret not being able to wear silver jewellery due to their natural allergy. There’s also a healthy dislike for the Twilight-era representation of vampires, which is always great.

It goes without saying that Jemaine Clement is pretty excellent as vampire Vladislav. Based on the legend of Vlad the Impaler, this Vladislav is a vampire whose abilities have significantly declined over time, however he still retains some of that smooth confidence in his past achievements. Taika Waititi is so innocently funny as Viago. Taking the responsibilities of the household upon himself, Viago just wants everyone to get along. Jonny Brugh as Deacon is probably the letdown of the cast, as some of his humour doesn’t quite land. But two other actors are also highlights – Cory Gonzalez-Macuer as Nick, and notably, Stu Rutherford as Stu. Stu in particular got the most laughs from me. This is an ensemble cast who really suit one another and play off each other well, and they are a joy to watch both when interacting with one another and by themselves. Rhys Darby is also in this, with a small but somewhat scene-stealing role.

Shot in a mockumentary format, the film makes use of both talking head interviews with the subjects of the film and observational footage of the vampires going about their daily life and adventures. It doesn’t feel like a documentary for some reason though, even though at the very beginning we’re informed that it’s been filmed as part of the “New Zealand Documentary Board”; which I’m sure doesn’t actually exist. Perhaps the humour is so distracting that we forget it’s meant to be a documentary; however the same can’t be said for This Is Spinal Tap (1984), so I’m stumped on that logic. What We Do In The Shadows is also a delight for the eyes and ears with some nice direction and excellent set and costume design, and jaunty, discordant music that suits the eccentricities of our characters well.

What We Do In The Shadows is a wonderfully funny mockumentary hailing from New Zealand, with the country’s characteristic style of humour; deadpan, subtle, and quaint. The comedy powerhouse of Jemaine Clement and Taika Waititi, in combination with the wealth of material from vampire lore and mythology, means that this film is a fresh and funny take on vampires and vampirism. The plot moves along at its own natural pace with no real defined plot, but it does unfold in a natural manner, and is so watchable and enjoyable. It’s absurd and strange, with great comedic timing. Definitely one to watch.