For the month of January, the genre of choice for Movierob‘s Genre Grandeur series was sci fi, chosen by Natasha of Life Of This City Girl. I decided to watch and review a film I’d never seen before, but had heard excellent things about – Danny Boyle’s Sunshine (2007). You can find the rest of the January Genre Grandeur film reviews listed here. For my review of Sunshine, read on! 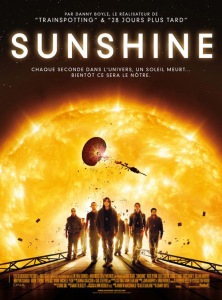 A sci fi thriller set in a not-so-distant future where the sun is dimming and Earth is in peril, Sunshine (2007) is directed by the one and only Danny Boyle, whose other cinematic accomplishments include but are certainly not limited to Trainspotting (1996), 28 Days Later (2002), and 127 Hours (2010). In 2057, an international team of astronauts and physicists are sent into outer space via space ship Icarus II, with a mission to reignite the fires of the sun with a gigantic nuclear bomb.

The first thing you need to know about Sunshine is that it is one of the more intense films about space and space travel out there. I would compare my stress levels whilst watching this with my stress levels whilst watching Alfonso Cuarón’s Gravity (2013) – and that was a lot of stress. Danny Boyle is the master of making his audience become increasingly freaked out, but also managing this such that the story is still digestible. Boyle is particularly excellent at managing claustrophobia in Sunshine – the space ship’s confines serve as the landscape for the majority of the film’s action, with no cuts back to Earth to let us enjoy some air and space to breathe. The action is relentless once it kicks in, and Boyle’s directorial approach is to face it head on.

Sunshine is truly an ensemble affair, with a cast that balances one another in terms of their characters’ actions but also their basic approach to the dangerous situations at hand. Cillian Murphy shines (no pun intended) as physicist Robert Capa. Murphy’s performance is strong yet subtle, providing an emotional core balanced with a scientist’s intuition. Chris Evans is also a surprise highlight as engineer Mace, whose black and white approach to moral conundrums are at odds with Capa’s balanced assessments of risk. Michelle Yeoh, as biologist Corazon, puts in a very clever performance as her character adapts to traumatic events. Other highlights include Rose Byrne as pilot Cassie, and Hiroyuki Sanada as ship captain Kaneda. The strength of this film is that it doesn’t rely on one person to carry the sum of its drama and thrill.

The film has copped quite a bit of criticism for its supposed scientific inaccuracy, and I’m not a scientist, so I can’t exactly confirm or deny that point. But I can speak to the film’s suspension of disbelief. Initially, it didn’t really make sense to me that a giant bomb could ever reignite the sun, given how tiny the giant bomb is in comparison to the gargantuan star. But over time, my concerns about this lessened as I became really involved with the characters and the drama at hand. It does provide some reassurance that Boyle consulted with excellent physicist Brian Cox in order to ensure the spacey shenanigans were as accurate as possible, and to ensure that what’s on display reflects the realities of catastrophic events in space. Some moments feel unlikely, but as aforementioned, by that time you’re more worried about the people involved rather than issues of logic.

Creatively, Sunshine is a triumph. Not only does Boyle’s direction amplify the claustrophobic nature of the drama, but he and cinematographer Alwin H. Küchler also play with colour to great effect. The inside of the space ship Icarus II, and all of the costumes and interiors, are visualised in blue tones, causing a blinding effect every time you see the bright yellow and orange sun in all its glory; mirroring the characters’ bewilderment at their situation. The music is ambient and largely electronic, with actual space sounds sampled, however there are some instrumental moments to take you by surprise. The soundtrack is quite beautiful, in contrast with some of the more brutal action on display throughout the film.

Sunshine is a deep film that will make you think. Later in the story, it delves into themes such as religion/faith versus science in such an intense manner, which is just another layer to its overall complexity. But it’s also a very effective science fiction thriller – with a story that plummets along not unlike the Icarus II ship through the field of space in which it traverses. An ensemble cast provides the acting chops with which the story is communicated, with Cillian Murphy being a particular highlight. With an ending that will give you goosebumps, Sunshine is a great sci fi thriller, no matter how stressful it makes you feel.