After watching Joshua Oppenheimer’s The Look of Silence (2015) recently, I almost decided to revisit his preceding film, The Act of Killing (2012), to revisit where Oppenheimer’s focus on Indonesia began. But then I decided that I didn’t want to put myself through this supremely uncomfortable film again, even though it is an amazing documentary. Here’s my review on this very important film. 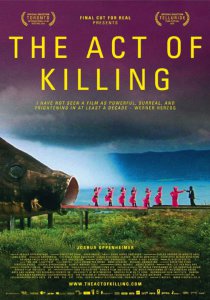 Joshua Oppenheimer’s The Act of Killing (2013) is a surreal documentary about a dark time in Indonesia’s history. In 1965 to ’66, an anti-communist purge occurred all throughout the country, as a new president was elected and the country’s Communist Party was decimated. Death squads were responsible for killing one million communists and ethnic Chinese. The focus of this documentary, ex-death squad leader Anwar Congo, was personally responsible for the deaths of approximately 1000 people in Medan, North Sumatra. Nowadays, Congo is a loving grandfather who leads a fairly quiet life in comparison. The film follows the director’s challenge to Congo to represent his activities in the death squads on film, in any manner he chooses.