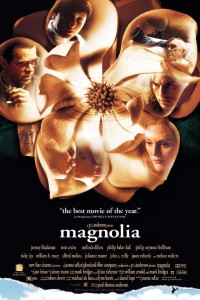 Magnolia (1999, dir. P. T. Anderson) is probably the film that I have been most looking forward to seeing out of my Blindspot list this year. I love and adore P. T. Anderson (also known as Paul Thomas Anderson), and I adored watching Boogie Nights (1997) for my Blindspot challenge last year. Will Magnolia match up to my enjoyment of that masterpiece? The story is described as “An epic mosaic of interrelated characters in search of love, forgiveness, and meaning in the San Fernando Valley” (source), and the word ‘epic’ could not be more significant.

Magnolia is actually a film that I have struggled to write about for quite some time after watching. I suppose the most important thing to describe about this film – apart from the classic cinematic elements such as direction, acting, et cetera – is the way that it makes you feel after it ends and the credits start rolling. After finishing Magnolia, with its whopping runtime of 188 minutes, I felt completely bewildered in the best way possible. Not only was its ending nonsensical enough to make you feel shock and awe, but the way each sub-story ended all had a significant impact on the story, the characters, and the viewer (i.e. me). Watching this film is a strange experience because after its massive runtime, you feel like you’ve run a cinematic marathon and have well and truly been run through some kind of emotional torture device with a finale that shouldn’t make you feel elated, but yet it does. It’s a confusing and overwhelming film-watching experience in a good way. I was enthralled.

P. T. Anderson is very much inspired by the cinematic works of director Robert Altman, which is a great thing. Altman, with his amazing films such as Short Cuts (1993) and Nashville (1975), truly specialised in crafting epic stories with a sprawling array of characters that were somehow all interrelated, and connected by some kind of natural or supernatural disaster by the film’s conclusion. And Magnolia is no different. The beginning of the film tells a story about coincidence, a theme which is referenced throughout the film’s events. With this theme framed in mind, the viewer is primed for the interconnectedness they are about to see; both in terms of the character’s relationships and stories. Each of the characters has their own individual motivations and intentions which differ from one another on the surface, however each character does appear to be searching or striving for something, trying to make meaning out of their life and circumstances, trying to sort through the ghosts of the past.

The ensemble cast is so impressive, and so extensive. Tom Cruise is particularly notable as misogynist public speaker with a shady past, a role for which he won a Golden Globe award for Best Supporting Actor in 1999, and was nominated for a Best Supporting Actor Oscar in the same year. John C Reilly is pathetically lovable as a police officer who finds love in an unlikely place, Julianne Moore is the unhinged wife of a terminally ill man who is attended by caring and altruistic nurse Phillip Seymour Hoffman, and William H Macy shines as a previous child celebrity-slash-genius who has grown up with a big chip on his shoulder. These are but a few of my favourites out of the larger whole of the cast. However, my favourite element of the entire Magnolia cast mosaic was the story that mirrored that of William H Macy’s; a young boy, precociously intelligent, excelling at a game show. Jeremy Blackman is one of the better child actors I’ve seen, and his anguish throughout this film is heartbreaking. Perhaps what I appreciated the most about this ensemble cast is that there’s no apparent lead actor. Each story appears to be given equal weight, and there is no dead weight whatsoever.

P. T. Anderson’s method of direction, as with Boogie Nights and with the rest of his excellent filmography, appears to be consistent with his bold and courageous visual style, and a constantly moving camera that takes in all elements of a scene and provides the viewer with constant visual stimulation. Anderson is not afraid to show us the entire extent of a character’s emotions, whether these are to be positively received, or are reprehensible and corrupt. Amazing cinematography by Robert Elswit, who also worked with Anderson on Boogie Nights, ensures that the eye is fed with very pleasing visuals and a rich yet minimal colour palette, which apparently evokes the colours of the magnolia flower itself; greens, browns, and whites. With Magnolia‘s excellent visual elements, its simply amazing screenplay by Anderson as well, plus a stellar soundtrack with songs by Aimee Mann, the overall effect is one of a very specific creative drive and concept that has been fully realised. And just when you think the film is already amazing, all of a sudden an ensemble song performance occurs, with each character singing to the viewer and musing upon the themes of the film itself. The overall effect is dizzying.

Overall, I absolutely loved Magnolia. I was initially quite daunted by its massive runtime of 188 minutes, however I soon found that Magnolia is one of those films where you are fully immersed in the story, characters, and creative elements – to the extent where time flies past much quicker than usual. P. T. Anderson is a genius, in terms of his direction, screenwriting, and his handling of an extensive ensemble cast. Magnolia is a film that I won’t soon forget, a film that has probably had an impact on the way that I’ll watch all other films for a long time. It’s set the bar very high for the rest of my Blindspot list, that’s for sure.