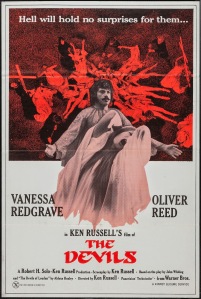 A controversial historical drama slash horror film filled to the brim with depravity and religious hysteria, The Devils (1971) is directed by Ken Russell, whose penchant for darker themes relating to sexuality and psychology is on proud display. Its synopsis is as follows:

In 17th-century France, Father Urbain Grandier seeks to protect the city of Loudun from the corrupt establishment of Cardinal Richelieu. Hysteria occurs within the city when he is accused of witchcraft by a sexually repressed nun. (source)

I had wanted to see this film for a very long time before I saw it very recently. And with all that lead up, and the expectation of seeing something so depraved and blasphemous, I really was not disappointed. This is one film that you may find very uncomfortable to watch if you have strong Christian beliefs. There are a number of scenes that would probably be quite offensive to people of faith, particularly relating to the intersection between sexuality and religion, and what happens when sexually repressed nuns and priests let go of their stringent moral code. Upon its release, The Devils was banned in several countries and heavily censored in others, and the original cut is largely unavailable to watch. Still, watching The Devils in its somewhat edited form still feels like you’re running a psychological marathon. I can hardly imagine how intense the unedited cut is.

Storytelling-wise, The Devils has a bit of a slow start. Initially, the world-building by Russell is slightly confusing. However, once we learn more about the setting, the time period, the religious landscape, and the convent of nuns, the world begins to make sense – and the story takes off, relentlessly. The way that 17th century France is communicated in this film is probably my most favourite part. Visually, The Devils is an absolute masterpiece of set and production design. The world is coloured predominantly in white and black, with occasional shades of red and flesh tones. The sets are huge, art deco style architecture dominating the landscape, which is at odds with what we know of the design aesthetic of 17th century France. It’s all wonderfully strange, but it also communicates the psychological landscape of the film and time period – punitive, harsh, dichotomous. Russell’s direction, and editing by Michael Bradsell, is a combination that cannot be bested. Some moments in the film are so disorienting and disgusting, but we’re fully immersed in the hell of the moment with those on screen.

Vanessa Redgrave and Oliver Reed, as Sister Jeanne and Father Grandier respectively, lead this film absolutely fearlessly. Redgrave in particular conveys the hysteria of the convent in such an authentic and disturbing manner that some scenes feel horrifying to watch. Her tics and physical movements feel like that of a predatory insect, intensifying as her hysteria escalates. Meanwhile, Reed plays the role of a highly charismatic Roman Catholic priest, which is based on a true historical account. I actually don’t think I’ve seen much of Oliver Reed in films and I feel like I should have seen more. He plays this role with such passion that it is infectious. Credit must also be given to all the women who played roles as increasingly hysterical nuns at the convent, whose performance as a group was at once frightening and impressive.

The Devils is a film that you might have to spend some time trying to find a good version of, but once you find it, it is well worth watching. If you love watching controversial films to see exactly what all the fuss is about, then you may enjoy this as well. But it’s also worth enjoying for its amazing production design and direction by Ken Russell, and some absolutely stellar performances by Vanessa Redgrave and Oliver Reed. It is a complex and disturbingly beautiful portrait of religious hysteria gone absolutely mad. The Devils can be an uncomfortable film to watch, but it is an absolutely unforgettable one.