Alain Resnais’ confronting short documentary Night and Fog (1955), known in its native French as Nuit et Brouillard, focuses on the atrocities of war – more specifically, the Nazi concentration camps during World War II. Resnais directs his keen eye on the Auschwitz camp in particular, showing us the different buildings and areas of the camp, as it was documented as an active camp and then ten years later when this was filmed. Resnais tells us the history of the concentration camps, and the hell that was experienced by the people who were murdered within them.

Alain Resnais is well known for his more abstract, surreal or dream-like films, such as Last Year At Marienbad (1961) and Je T’aime, Je T’aime (1968). But Night and Fog is realism at its purest – and its most brutal. As aforementioned, this short documentary is very confronting. Not only does it show some quite shocking and graphic footage of the atrocities of Auschwitz, but it also forces its viewers to consider what happens when you don’t look back on the facts of the past. Who carries the guilt? Who is responsible for what happened? Can any one person be solely responsible? Resnais asks the hard questions, which don’t seem to have any concrete answers. Resnais looks to the future, making the point that if this could happen once, surely under certain conditions these reprehensible acts could be committed again, and must be prevented. 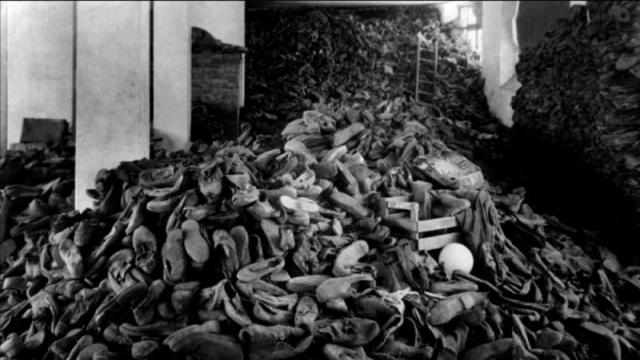 The image above of the discarded shoes of the victims of Auschwitz is one of the many images in the film that struck me as particularly significant. Each pair of shoes represents a person, a full life. There are more confronting images of dead bodies, of human remains, of an entire room filled with cuttings of human hair. But each shot is shown as it is – with no fancy camera tricks, we are invited to simply observe humanity at its worst, if we can bear to watch. These shots are accompanied by paradoxically relaxing yet chilling music by composer Hanns Reisler, and beautiful, honest words written by Jean Cayrol and spoken by Michel Bouquet. Resnais sourced his documentary footage from archives including French, Soviet and Polish newsreels, footage shot by detainees and the Allies, and included this older black and white material with new, colour footage shot at Auschwitz and other camps as they stood in 1955. The combination of these appears jarring in the film – going from a grim, black, white, and grey world into a world of colour post-war. But symbolically, it makes sense.

Night and Fog is a tough watch. It’s approximately thirty minutes long, and those thirty minutes are some of the more difficult minutes you’ll see on film. But this is an extremely important documentary, and is necessary viewing. As Resnais shows us, it’s important to watch and to understand the atrocities that have been committed in the past, in order to prevent them from occurring in the future. I’m glad that I watched this for A Timely Blogathon, but at the same time, I’ll have to wait some time before I might be able to watch it again.

This post is a part of A Timely Blogathon in collaboration with Movierob. Check out the blogathon information page here!

← The Joan Crawford Blogathon: What Ever Happened to Baby Jane? (1962)
A Timely Blogathon: Final Round-up! →