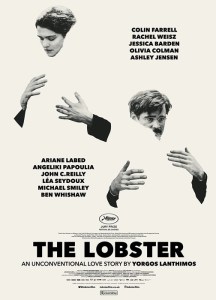 Director Yorgos Lanthimos’ sixth feature film, The Lobster (2015), is a strange and wonderful affair; a film that will stick in your mind for quite some time. It’s a story about the state of courtship and love in an unfamiliar, uncompromising, and mildly upsetting future. Its synopsis is as follows:

In a dystopian near future, single people, according to the laws of The City, are taken to The Hotel, where they are obliged to find a romantic partner in forty-five days or are transformed into beasts and sent off into The Woods. (source)

Here is a selection of my thoughts on this very unique film.