Five Things I Love About HBO’s ‘The Young Pope’

I took a week off work after getting married, and during that week I had the opportunity to binge watch a whole bunch of different television shows and films. I also took the time to think and write about things that had been on my mind for quite some time. But the one piece of media that I consumed over that week (and after finishing the last episode last night), which has completely bewitched me in numerous ways, was The Young Pope.

The Young Pope is an English-language Italian production, about the emergence of a new Pope – for the first time, an American Pope who is much younger than his predecessors, an enigma of a person, whose actions are unpredictable and uncontrollable. Lenny Belardo (played by Jude Law) becomes Pope Pius XIII, a secretive and conservative figure whose agenda is largely driven by his own personal experiences of growing up, rather than by the needs of his modern followers. This limited series follows Lenny/Pius as he assumes the role of Pope, confronts his own childhood experiences as they impact on his rulings, and tries to become a new kind of Pope who he believes the modern Catholic Church needs.

After finishing the series last night, I was blown away by how much I loved and adored it for so many reasons. The Young Pope is at times blatantly cynical, at times strange and abstract, and at other times, beautifully expressive and lyrical. I’m not a religious person, but I am highly interested in the happenings of the Vatican (hence why I couldn’t 100% hate Angels & Demons (2012), because at least the Vatican is interesting), and the art, architecture and general beauty of the Vatican City. Watching this series gave an intriguing insight into life in the Vatican, the political rumblings within the upper echelons of the Catholic Church, and the sheer weight of expectation upon a young(er) person who might assume the role of Pope. Not only that, but the series is an artistic wonder with extremely high production values and excellent performances.

Without further ado, please find below my top five reasons why I loved and adored The Young Pope. 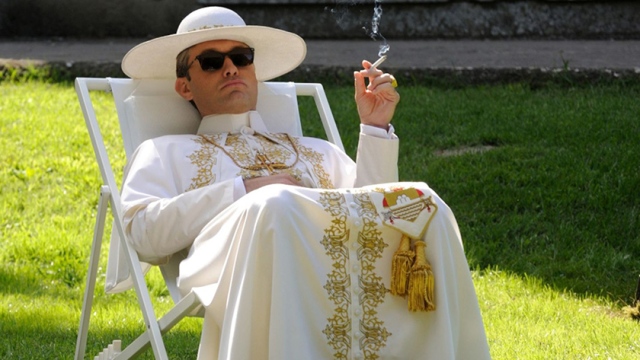 For some reason, I was never a fan of Jude Law. Perhaps it’s because I just haven’t seen enough of his films or performances to be impressed by him. But after finishing this series, I can say that I am mightily impressed by his performance. Law plays Lenny/Pius as a charismatic, complex, manipulative, and enigmatic man, who is occasionally domineering and frightening, in a sensitive performance that is at once mature and child-like. It’s a very layered and nuanced performance which I’m now convinced that only Law could play; that’s the extent to which he made this performance his own. Diane Keaton receives an honourable mention for her performance as Sister Mary, which was lovely.

This opening title sequence doesn’t appear until a couple of episodes in, so when it did appear, it was a nice surprise. The mix of gaudy neon lighting typography for the credits, with the classical religious paintings above, represents a mix between the modern and the archaic; or, the gaudy and the classy. Meanwhile the Pope is just walking along, as if through one of the Vatican’s many halls of paintings. It’s simple, but it’s effective. This is set to a fantastic instrumental cover of ‘Watchtower’ by Jimi Hendrix, by English musician Labrinth. My favourite part is Jude Law’s sly wink to the camera at the end, before a sneaky meteoric surprise, which strikes down the Popes before him.

Who would have known that music by now-defunct party anthem band LMFAO would suit this show so well. The whole sequence built around this song is perfect, and works perfectly when you know that it’s essentially a hype-up song for what is next to come with Pius’ address to the cardinals. Come to think of it, all of the music in the show is perfect. There’s a mix of the gorgeous original score by composer Lele Marchitelli (who also scored Sorrentino’s The Great Beauty (2013)), and modern music that suits the tone of the series. But the show is filled with these little moments that are surprising, some of which elicit a laugh out loud, some of which cause your jaw to drop in shock. 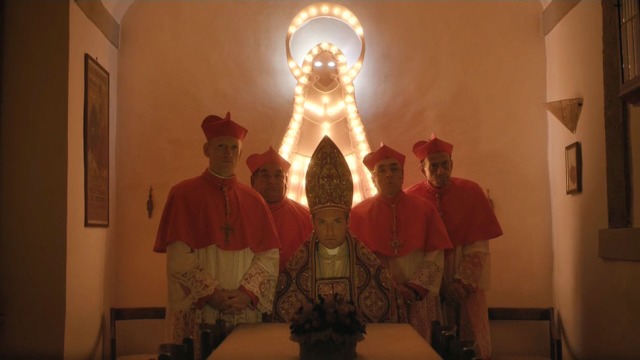 I love Paolo Sorrentino. The Great Beauty (2013) is one of my favourite films of all time, and a significant part of my love for that film is Sorrentino’s flawless eye for a beautiful shot. Sorrentino also brought his A-game for The Young Pope. Each and every frame of this series is like a work of art, and is carefully arranged like a classical painting. Sorrentino shows his love of gorgeous, rich, sumptuous colours and textures (the cinematography across each episode is also A+), shadows and light, mirroring and symmetry within a frame, quiet moments which are at once contemplative and extremely communicative. Sorrentino makes good use of the architectural beauty of Vatican City and the Apostolic Palace, which were meticulously recreated in studios and look as good as the real thing. As aforementioned, the production values are extremely high, to the overall benefit of the show’s quality – and the excellent direction by Sorrentino mirrors this quality.

5. What is this show even trying to say?

The Young Pope has so many different, and potentially conflicting, messages for its viewers. Is it a treatise on the burden of power on those who must carry it? Is it a reflection of a church in distress in today’s modern age, trying to find itself? Is it a drama, is it a comedy? Is it an exploration of the power of God, of God’s ability to perform miracles? The Young Pope is constantly seeking equilibrium within itself. The show’s funny moments are balanced out by beautiful and eloquent discussions about the nature of God, religion, and the self. The fact that there are so many different ways of interpreting The Young Pope is part of the reason why I love it. I would hazard a guess that every viewer who consumes the deliciousness of this show, will take a different message from it. I don’t know if there will be a second season to explain what was going on in this first (and as yet, only) season. In a way, I feel like this limited series consisting of one season tells us enough, and has given us enough of what we need to interpret and understand it. Paolo Sorrentino trusts his viewers to make sense of the whole rigmarole themselves. I can’t wait to rewatch the show and see what I take from it upon second viewing.

(Yes, the above gif is a moment from the show, and is one of the show’s many random, delightful surprises.)

For Australian viewers, The Young Pope is available to view via streaming on SBS On Demand, my newest favourite streaming platform purely due to its wonderfully curated selection of films and television shows. Have you seen The Young Pope? What did you think? Let me know below!