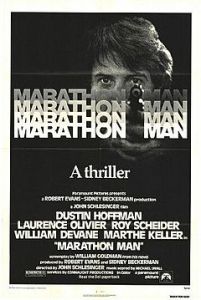 A suspenseful thriller film with a solid historical backbone, Marathon Man (1976) plays host to some masterful performances between actors who share excellent chemistry, and some iconic scenes that are so anxiety-provoking that they are almost physically painful. Its synopsis is as follows:

A graduate history student is unwittingly caught in the middle of an international conspiracy involving stolen diamonds, an exiled Nazi war criminal, and a rogue government agent. (source)

Here are some of my thoughts on Marathon Man.